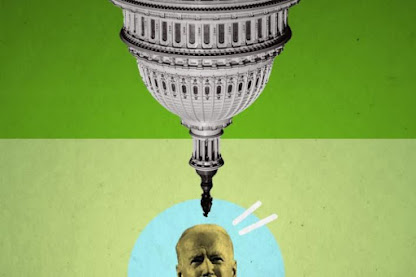 A news item in Yahoo News, published on November 4, 2020, one day after the election, suggests this possibility: "A Biden presidency might essentially be over before it can begin."
Here is how David Faris, a political science professor at Roosevelt University, seeks to justify that headline:

The 2020 presidential election is a cliffhanger, and we may not know the final results for days. But Democratic nominee Joe Biden has pulled ahead in the critical states of Michigan and Wisconsin with plenty of blue-leaning mail ballots to count. Because [Biden] won Arizona as well as Nebraska's second congressional district and leads narrowly in Nevada, President Trump has probably been defeated. The real question is whether Biden adds Pennsylvania and Georgia to the tally or whether we are looking at the closest outcome in the Electoral College since 2000. Even if Trump were to wave a magic wand to stop ballot counting everywhere, at the moment he would still lose. Biden will win more votes than any presidential candidate in history and could still end up winning nationally by 6 points or more.

In a functioning country with responsive institutions, it would be time for Democrats to pop the champagne. But the United States' anachronistic institutions grant a minority of the population outsized power, and even though Democrats held onto the House of Representatives, Republicans have a very good chance of hanging on to a bare majority in the Senate. This means any Biden agenda other than ruling through executive orders is basically out the window (emphasis added).

The premise upon which this analysis is based is that Republican Party members of the Senate will vote, in all significant cases, to advance partisan objectives, and that such Senators will be permanently unwilling, or will in some way be unable, to vote for a legislative proposal that is advanced by a president of the opposite party, or that is supported by Senators who are of the opposite party, no matter how reasonable and responsible that proposal might be, and no matter how popular.

The Faris' analysis, in other words, accepts as a fact that our system of government is totally partisan, not "representative," in the sense that the Constitution envisions, and that the kind of conduct that we have, indeed, witnessed over the past four years is an inevitable part of our political system.

This suggestion is a hypothesis, not a fact, and our politics have not operated in that way for most of our 244 years of political history. Thus, I would like to suggest a contrary hypothesis.

If the president were to propose legislation that significantly responds to the climate crisis, or that addresses issues of racial justice that clamor for remedial action, or that would deal in a meaningful way with the massive economic inequality that underlies much of the polarization that has afflicted our society, it would be possible to find two or three votes, or four, or more, out of fifty Republican Senators who would support reasonable and responsible legislative proposals on these and other subjects.

Of course, there would have to be a very significant campaign based in the districts of the Senators, in which the Senators understood that there was strong majority support for these propositions among the voters who will determine whether or not they return to office.

This is just a reminder: If members of the public actually care enough to get really engaged in these political controversies, and if they decide to exercise their political power, instead of standing around like observers, and wringing their hands, our system of democratic self-government can, in fact, be made to work. It has before, and my bet is that it will again.

As I say: Just a reminder!