#279 / The Revelation Of Marilynne Robinson 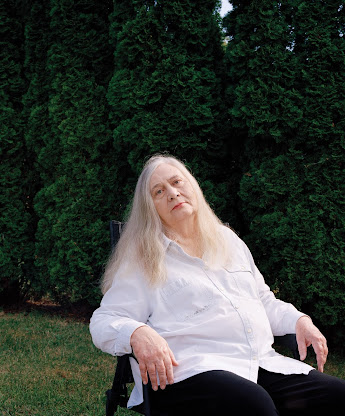 That is Marilynne Robinson, pictured above. The image has been captured from an article published in the October 5, 2020 edition of The New Yorker.
Online, the title of The New Yorker article is: "Marilynne Robinson’s Essential American Stories." I much prefer the title provided in the hard copy version of the magazine:
Book Of Revelation
Robinson is both an essayist and a Pulitzer Prize-winning author of fiction. She is also a Congregationalist preacher. Her most recent book is Jack, the latest in a series of novels, the first in the series being titled, Gilead. The quotation below is the last two paragraphs in The New Yorker article, and they did strike me as providing a kind of "revelation," though I don't know whether they will seem like a revelation to you - to whomever may be reading this.
"Jack" is the fictional character that Robinson is writing about in her latest book. He is white, the son of a preacher, and he is more or less a good-for-nothing, having an alcohol problem, and having been in and out of jail. Della is a black school teacher, and the two have most inexplicably met and fallen in love. The real purpose of this blog posting, pretty much, is to share the two paragraphs below, with the hope that readers may be as moved and impressed as I was by the following observation:

The final scene of “Jack” is set in one of the most famously contested spaces of the civil-rights movement. In the hands of a lesser novelist it would seem unconvincing or contrived, but in Robinson’s hands it is revelatory. Jack and Della are together yet necessarily apart, seated on a segregated bus. They have decided against their families and in favor of each other, and Della is pregnant with their child, who everyone worries will have a more difficult life than either of his parents. We know from “Gilead” that, in eight years, Jack will find the courage to return home to Iowa, after a two-decade absence, and will appeal to his namesake for help convincing his father and the rest of the town to accept his wife and son. And we know that there will be another twinned generation of these two families, in the form of two boys named Robbie: Robert Ames, the son of the elderly John Ames, and Robert Boughton Miles, Jack and Della’s little boy. But, for now, Robinson leaves the lovers in motion, in the middle of their own lives, in the middle of history.
It is in this moment that we realize that Marilynne Robinson’s grand restoration project includes one of the oldest but most misunderstood stories we tell about ourselves. Like Adam and Eve, Jack and Della are banished, but they are banished together, and that is enough of a miracle that Jack reconsiders what he has always thought about Genesis: that the fallenness it describes is his lot in life, and our lot in the universe. Too often, he now thinks, we attend to only “half of the primal catastrophe,” focussing on what was lost in the garden while forgetting what was gained. But, Robinson insists, “guilt and grace met together,” for in eating from the tree of knowledge we did not only learn about evil. We also learned about goodness (emphasis added).

All of us, right now, in whatever condition we find ourselves, are likely thinking about the fallenness of our nation, about what we have lost, about everything that we have let slip away. Different varieties of evil consume our thoughts, from racial injustice, to the climate crisis, to the global pandemic that has brought death to so many, to the unfairness and inequality of our economic system, to the dangers that threaten our attenuated democracy. These evils are so obvious and so threatening that we can hardly think of anything else.
But is there, perhaps, something that we have forgotten, that we have overlooked? Is there not a profound and saving goodness, to which we all have access, and to which we can all repair?
The goodness found in each one of us is what I mean, the goodness we can find in one another. Of course, we do need to look for it; we need to have to have the faith that if we do look for it, we both can and will find goodness in other people.
Of course, we do have to look. But when we do that, when we look, don't we see that goodness there?
I think we do.
Image Credit:
https://www.newyorker.com/magazine/2020/10/05/marilynne-robinsons-essential-american-stories