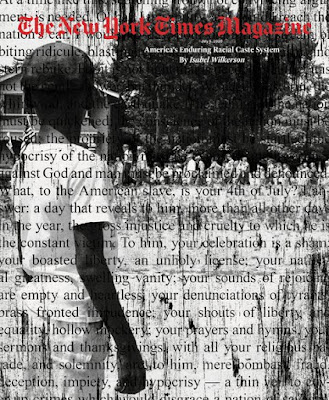 By the time anyone is actually reading this blog posting, there will be yet another edition of The New York Times Magazine to read. Each Sunday, the magazine appears both online and on my front walkway. The image above is of last week's cover. It is dated July 5, 2020.

That cover shown above highlights an article by Isabel Wilkerson, exploring the racial caste system that conditions so much of our politics, economics, and social life. The words that are superimposed upon the image are from Frederick Douglass's famous Independence Day speech, in which Douglass asks, "What, to the American slave, is your Fourth of July?" The article printed in The Times is adapted from Wilkerson's forthcoming book, Caste: The Origins of Our Discontents, which will be available for purchase on August 4th.

In Wilkerson's article, which ventures to India with Martin Luther King, Jr., as an "American untouchable," Wilkerson makes an analogy between our contemporary race relationships in the United States and her aging, really wonderful house, but one needing attention, a structure needing more than incidental repair. Most of Wilkerson's article is a profound exploration of what she identifies as a racial caste system that prevails in almost every part of our national life. Wilkerson begins her article, though, with a reference to a problem she has discovered in the ceiling of one of the rooms in her house, and then she ends her article this way:

It was earlier that spring that I was forced to face the mystery of the misshapen corner of the ceiling in my own old house and summoned inspectors to try to solve it. One man used an infrared light. Others went into the attic and onto the roof. The bow in the corner had come from a long-ago leak that had grown beyond notice, unattended by a series of previous owners, the moisture from the original leak long evaporated but leaving the plaster weakened over time, heavy and tugging at adjacent seams, inch by inch, until a section of the ceiling was now threatening to cave in on itself and perhaps take the rest of the ceiling with it.

I hadn’t caused this problem, hadn’t been there when the leak first crept toward the ceiling. In fact, I had been the one to install the new roof. But it fell to me to fix it or suffer the consequences. Contractors offered to trim it out and Sheetrock over it. A plasterer said he could replaster the fragile section to blend with the rest of the old ceiling. It would be indistinguishable to the naked eye but would not protect against further weakness in what remained of the original plaster, strained as it was from the adjacent frailties.

The only way to truly fix it, he said, was to tear out the plaster, down to the beams, inspect and rebuild the rotting lath and replaster the entire ceiling. And so we did. It took days to scrape and inspect, recast and reconstruct. When it was done, it was quietly glorious, as ceilings go.

And I could breathe free, knowing, as we now are called upon to do in our era, in the house we all live in, that it was sound and secure, not merely patched and papered over, but maybe even better than it was, for ourselves and for the generations that come after us (emphasis added).

May I commend this article to you? I do.

Let me endorse, also, the home repair philosophy that Wilkerson promotes, a philosophy that she suggests should be our guiding principle now, as we take up, once again, the challenge spelled out in the Preamble to our Constitution, to create a "more perfect union."

Those alive today, perhaps, are not those who really caused the greatest problems in our contemporary politics, society, and economy. But we do have significant problems now, and they are clearly related to the racial caste system that prevails in this country. These are problems we must repair. The problems we confront may stem mostly from mistakes made in the past, and a national inattention to the mistakes, long extended. Nonetheless, we who are alive today do inhabit the house, and a house divided against itself cannot stand.

Unsought though the task might have been, it falls to us to go to work, once more, to achieve that "more perfect union" that was the original goal. Once more, we must do the work to build a nation that is strong enough to support what we absolutely know will be tempests and trials as great, and maybe greater, than any tests and trials that this nation has faced before.

Do I suggest that we cannot settle for a nation that is merely patched and papered over?