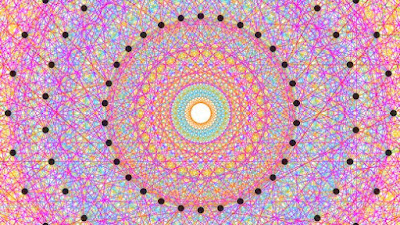 As I believe I have revealed before, I am not much of a "math guy." My engagement with mathematics is basically aspirational. Do I wish I could understand math? Yes, I do!

Quanta, an online magazine that focuses on mathematics, physics, biology, and computer science, sends out periodic bulletins, alerting readers to interesting articles. I subscribe. This is just one evidence of my aspirational engagement with math. I almost never understand the articles I read in Quanta, but I read them anyway, and these articles do sometimes give me ideas.

The illustration that I have placed at the top of this blog posting was attached to an article that ran in Quanta on June 9, 2020. Focused on "Representation Theory," the article explored a branch of mathematics that, while once dismissed, is now seen as "central to much of mathematics." Having read this article, do I now understand "representation theory?" No, I do not!

However, here is a statement in the article that struck me as useful, and applicable in non-math contexts:

Representation theory is a way of taking complicated objects and “representing” them with simpler objects. The complicated objects are often collections of mathematical objects — like numbers or symmetries — that stand in a particular structured relationship with each other. These collections are called groups. The simpler objects are arrays of numbers called matrices, the core element of linear algebra. While groups are abstract and often difficult to get a handle on, matrices and linear algebra are elementary.

It was the word "representation" that attracted my attention to this article. Since I write daily blog postings under the legend, "We Live In A Political World," my engagement with "representation" is mainly with how this principle works in a political context.

We do live in a "political world" in which "representation" is the way we deal with complicated realities so that we can then "understand" and confront these realities with enough accuracy to be able to take appropriate action. That is the purpose of our "representative democracy." To be able to have a functional democracy, we need to find a way to act effectively and coherently despite the incredible complexity of our human interactions, which seem all too often to be self-canceling. We have devised a system to deal with social, political, and economic complexities by "representing" them with simpler concepts.

In the math context, the article in Quanta makes this observation:


A representation provides a simplified picture of a group, just as a grayscale photo can serve as a low-cost imitation of the original color image. Put another way, it “remembers” some basic but essential information about the group while forgetting the rest. Mathematicians aim to avoid grappling with the full complexity of a group; instead they gain a sense of its properties by looking at how it behaves when converted into the stripped-down format of linear transformations.

“We don’t have to look at the group at once,” Norton said. “We can look at a representation that’s smaller and still understand something about our group.”

In politics, we reduce the incredible complexity inherent in individual human lives to a simplified picture. The "political party" is one way such "representation" is carried out in our political world. Instead of trying to deal with the actual complexities, which might stymie any action at all, we decide to represent differences with that famous binary political choice: Democrat or Republican?

A system that works by electing officials "representing" a set of individual voters who happen to live in a particular geographic area is another example of how we reduce complexities to entities that can function effectively in a political context. In fact, that may be the fundamental way we seek to use "representation" to organize the complex reality of our lives into a form that will allow us, collectively, to achieve some reliable understanding of who we are, what we want, and what we are willing to do about it.

Like I said, I truly don't get the "math" part, but there is an idea here that has value for us politically. Within our political world, we need to remember that there are multiple ways that the truth can be represented, and we need to remember, above all, that our "representations" are not, themselves, realities. We use the principle of "representation" as a convenience, to help us deal with realities in a practical way, but the realities themselves are orders of magnitude more complex. We will go terribly wrong if we start believing that the "representations" we utilize are real things themselves.

The incredible polarization that plagues our contemporary politics demonstrates the danger of how our use of "representation" can go astray. I believe in "representative democracy," but I believe even more in the underlying truth that we are not, in the last analysis, what we are "represented" to be.

I intend to keep reading Quanta, even though I doubt that I am ever going to understand mathematics, however much I may aspire to do so. I do think, though, that there is a certain integrity in everything involved in our human existence, and that we can discover some valuable political insights as we seek to understand the arcane mathematical concepts that are probably beyond most of us.

That Quanta article on "Representation Theory" does provide such an insight. To solve political problems, to make politics work, we need to find ways to use the techniques of representation to make self-government possible. But we should never forget that we are not, in fact, "Democrat" or "Republican," "liberal" or "conservative." In truth, we are all living, breathing, aspiring human beings, and we are all in this together!