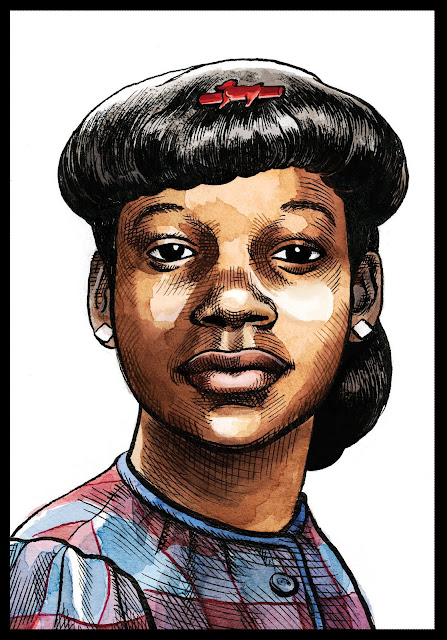 FOOTNOTE #1
That portrait, above, is of Latasha Harlins. She was killed in 1991. At that time, Latasha Harlins was fifteen years old. A storekeeper in Los Angeles shot Latasha Harlins in the back of the head, because the storekeeper believed that Latasha Harlins was attempting to steal a bottle of orange juice. The storekeeper was sentenced to pay the family $500, and to do 400 hours of community service. You can read more in the graphic "Diary" prepared by Laura Park, which appeared in the June 28, 2020, edition of The New York Times. Laura Park is a cartoonist and the illustrator of “Unstoppable” by Adam Rex and “Abner & Ian Get Right-Side Up” by Dave Eggers. 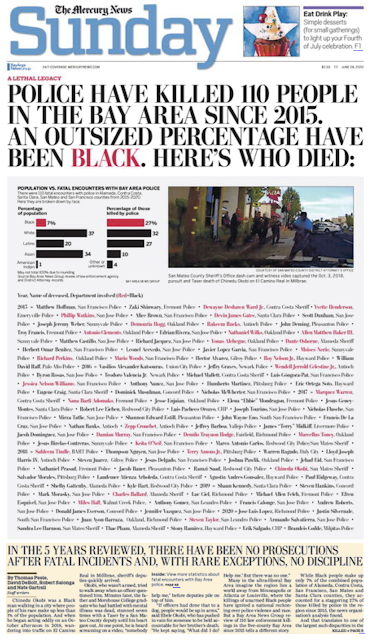 FOOTNOTE #2
The Sunday, June 28, 2020, edition of The Mercury News carried an extraordinary front page article titled "A Lethal Legacy." The article demonstrates that police officers in the Bay Area have killed many Black people since 2015, and that there have been no prosecutions of any of the officers involved, and, with rare exceptions, no discipline, either.

FOOTNOTE #3
In an article titled, "What Is Owed," Nikole Hannah-Jones documents how Black Americans have systematically been stripped of their wealth, and denied an equal opportunity to acquire and preserve wealth. She says: "Most Americans are in an almost pathological denial about the depth of black financial struggle. [A] 2019 Yale University study, called "The Misperception of Racial Economic Inequality," found that Americans believde that black households hold $90 in wealth for every $100 held by white households. The actual amount is $10."

The day after I finished writing my blog posting on "Ending The War," the June 28, 2020, Sunday newspapers provided the above illustrations of exactly why we need to act now, to find a way to end the oppression of Black Americans that has become so ingrained in the way our society and economy operate that injustice and inequality have become invisible to most white Americans.

We must not avert our eyes. We must change the realities we have allowed to exist.

We must end the war. 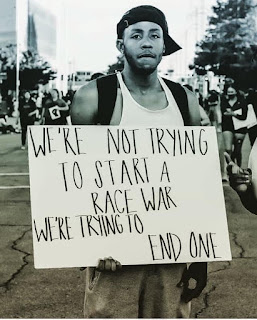