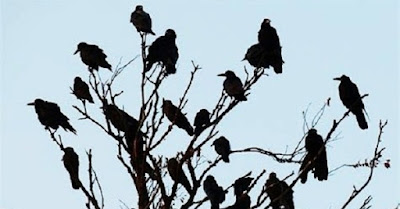 What you see, in the image above (at least the way I count it), are nineteen crows. The picture is a perfect illustration for the title I chose for my blog posting today - Corvid-19.

Corvid-19 is not the same thing as Covid-19, but I do think there are some similarities.

The dangers of Covid-19 are vividly apparent to us. That viral pandemic is life-threatening, and has driven us inside. The results of the Covid-19 pandemic have included death, despair, social separation, and massive economic dislocation. As we emerge from a long period of sheltering in place, we know that we must make some significant changes.

I am using the sobriquet Corvid-19 to alert us to a different kind of invasive bad news, an invasion characterized and defined by an untoward proliferation of crows (members of the Corvid family).

In Santa Cruz, California, where I live, crows seem to be taking over. You see them everywhere, flocking in trees, on telephone lines, on the ground. This is a change from our former, and more diverse, bird ecology. I don't think that the portents are good.

According to a book published in 2001, the kind of crow invasion that my local community has been experiencing evidences the converion of the natural world to the kind of unnatural environments generated by urban growth:

Corvid populations are increasing worldwide in response to urbanization. We investigated the response of American Crows (Corvus brachyrhynchos) to urbanization by (1) comparing rates of winter population change between urban and nonurban locations (using standard Christmas Bird Counts); (2) quantifying population size along a gradient of urbanization in western Washington; and (3) pooling studies from eastern (New York), midwestern (Wisconsin), and western North America (Washington and California) relating survivorship, reproduction, and space use to urbanization. American Crow populations tend to be densest and increasing most rapidly in urban areas of North America. This appears to be facilitated by small space needs of crows in urban relative to suburban, rural, and exurban areas. Crow survivorship is high across the urban gradient, but reproduction and hence population growth, peaks in suburban and rural settings. Local demographic considerations appear unable to account for changing winter crow populations. Rather, we hypothesize that urban crow populations may be increasing primarily as surplus crows from suburban and rural areas disperse into the city where anthropogenic food sources are easily located, rich, and concentrated.


Instead of "designing with nature," as Ian McHarg tried to teach us is essential, we are acting like our human creations can supplant the natural world.


Flocks of ravening and raucous crows are sending us a signal, very much like the signal we are receiving from the coronavirus pandemic. We are living in a world out of balance, and human activity is what is causing the distress.

The viral pandemic and the flocks of crows are sending us a signal. It is time to reorient our activities, and to subjugate ourselves to the wisdom of the natural world.