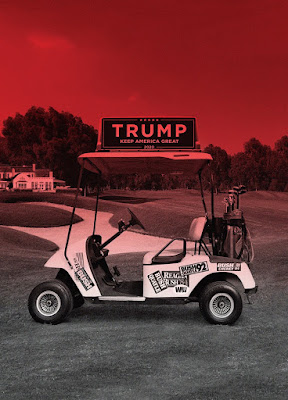 Having just polished off my blog posting made yesterday, extolling the virtues of The New Yorker, I was amused to find a message in my email inbox that promoted a New Yorker article titled, "How Greenwich Republicans Learned to Love Trump." It was as if I had received this email simply to prove my point! Read The New Yorker to find out what is really going on!

I do commend the article to your attention. As I say, I found out about it from an email bulletin from Axios, which gave me the following advice: "If you read only 1 thing: 'The Greenwich Rebellion.'"

Evan Osnos, the author of the advertised article, is The New Yorker's resident expert on China. Here, however, Osnos has turned his attention to the Country Club Republicans of Greenwich, Connecticut. There is a reason for that, of course. It turns out that Osnos grew up there.

As Osnos paints the picture, Greenwich was, for generations, a place that might have been thought of as the private political plantation of the Bush family. Generations of the Bushes dominated Greenwich politics, and particularly the polite and proper "style" in which politics was carried out, and its "service oriented" approach to government.

Consistent with this style was the call by President George H. W. Bush for a "kinder, gentler nation." Apparently, this was truly the spirit of the Greenwich Republicans - right up until Jeb Bush ran for president, and tried to tell Republicans "how ‘immigration is love." Osnos outlines how this very "starched collar" Republican stronghold decided to cast its lot with Donald J. Trump, despite Trump's failure to conform to the typical Republican Party archetype that had been admired in Greenwich up until that time.

One particular sentence in Osnos' article attracted my attention:

As I understand it, Osnos is reporting on national statistics here, and to me, the point is not that Trump supporters represented the well-to-do, and  that the supporters of Hillary Clinton were those who earned less. There is nothing too remarkable in that observation.

What struck me (not being much of a "math guy") was how that "average" income figure must have been derived, for both the Trump and the Clinton supporters. We all know that Trump's supporters include a huge fraction of the ultra-wealthy, that 1% of the population that controls over 90% of the entire wealth of the nation. Considering how much income each member of the "billionaire class" might command, there simply must be huge numbers of Trump supporters who are extremely low-income, if the average income of all Trump supporters ends up being only $11, 000 more than the average income of Clinton supporters.

In other words, when we consider the incomes of Clinton supporters, most of them earn something like $60,000 per year - certainly with some lower income persons and some higher income persons making up the average, but with the "deviation" from that average not being all that much. But there must be a huge deviation from the average when we consider the incomes of Trump supporters. He has, if Osnos' numbers are correct, a coalition that spans the ultra-wealthy (those from Greenwich, Connecticut being one component) to the very significantly below-average income workers that we see at Trump rallies.

For me, this is not a happy thought.

Osnos is concerned that the reputation of his home town has now changed, and that the place where he grew up has moved away from a kind of genteel, noblesse oblige politics to a politics that "forgives cruelty as the price of profit."

As Osnos sums it up, in the last line in his article, "In the long battle between the self and service, we have, for the moment, settled firmly on the self. To borrow a phrase from a neighbor in disgrace, we stopped worrying about 'the moral issue here.'"

My concern is somewhat different. If Trump and his Republican Party confederates can maintain a hold not only on the formerly "service oriented" rich people who have now accepted Trump's cruelty as "the price of profit," but can also attract huge numbers of those on the edge of poverty, a decent politics may be difficult to achieve. Where can a decent politics, that founds it appeal on the idea that we are  all "together in this," build a majority that can take back power from the ultra-wealthy, so that the immense productivity of this nation can be made to benefit the nation as a whole?

As I say, Osnos' article does not suggest that a solution is close at hand. Unlike Osnos, I don't have any special concern for Greenwich, Connecticut and the elites who live there. But I do care, deeply, about the United States of America, and what Osnos' article tells me is that we have a significant political problem. If large numbers of those at the "bottom" continue to identify with those few at "the top," we are left with an isolated "middle" that doesn't have the electoral strength to demand that the government respond to the needs of everyone.

Of course, that is not news. You don't have to read The New Yorker to understand that!