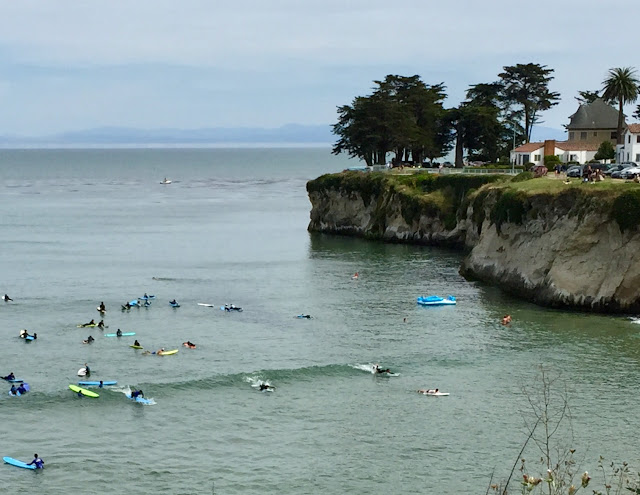 Brad Goodwin's letter from the Sunday, April 12, 2020, edition of the Santa Cruz Sentinel is reproduced below. Sounds like he may have heard the same story I did. The story I heard was that a Sheriff's Deputy waited onshore until a single, solitary surfer came in from riding the waves, and that the Deputy then gifted the surfer with a $1,000 ticket.

That story may well be apocryphal, but I think there is a point worth thinking about in what Goodwin says. Social distancing is important. I support the current social distancing rules, and as an article published in the Sentinel yesterday makes pretty clear - "Wave Riders Ponder Pandemic Rule" - surfing is not, always, a "solitary" sport.

Still, enforcement zealotry can be counterproductive. This is, in fact, exactly the point made by a Wall Street Journal editorial, in yesterday's edition, which offered some non-surfing examples of the phenomenon. When I first became a member of the Santa Cruz County Board of Supervisors, I was a pretty zealous "law enforcer" (zoning, not surfing, was generally the area in which I focused). I learned early in my tenure, though, that if the government wants to maintain its credibility, discretion must be exercised on how to apply the rules in individual situations.

When it's a big group on the beach, kicking back with beer and a bonfire, when its the "popular Steamers surf spot packed with people floating side-by-side and at times almost on top of one another," that's the time to make sure everyone takes those social distancing rules seriously. But when it's a single surfer, seeking to maintain the surfer's "physical and mental health," as Goodwin puts it, I am inclined to think that criminal penalties are not a very good approach. Gift that solitary surfer with a conversation, not a $1,000 fine.

Banning surfing is a bad idea
You will likely not find a person more pro police than I. I was a police officer and sergeant for the Santa Cruz police with a total of 26 years in law enforcement (I bleed both blue and tan and green). But someone needs to state the obvious, the Sheriff needs to seriously reconsider his recent, seemingly arbitrary decision, to close parks and outlaw surfing.

In Santa Cruz, running, hiking, mountain biking in parks and surfing in the ocean, can easily be accomplished using social distancing. This is especially true for surfing, where, by definition, it is an individual sport. With the current sheltering in place, the powers that be should encourage such activities, to maintain physical and mental health, rather than discouraging them in these trying times.