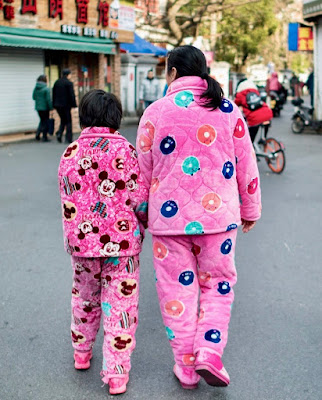 Look at that!!! Here are two persons wearing pajamas in public. What uncivilized behavior! Aren't you offended?

In China, the government has officially frowned on "uncivilized behavior," and pajamas in public is apparently right near the top of the list. According to a New York Times' article published on January 22, 2020, wearing your PJs in public is not that unusual in China, with elderly women being among the prime offenders.

In Suzhou, a city of six million people in Anhui Province, the local government published surveillance photos taken by street cameras of seven residents wearing pajamas in public. The photos provided names, government identification numbers, and the locations where this “uncivilized behavior” had taken place. The idea, of course, was to hold the pajama offenders up to public ridicule, and thus, perhaps, to stop any further offenses of this nature, protecting non-pajama people from having to tolerate those who decided to walk directly from bed onto the public streets.

Besides providing us with an opportunity to make fun of the local government in Suzhou, which was forced promptly to apologize when there was public outrage over "outing" the pajama-wearing grandmas, this incident might be instructive about the dangers of facial recognition technology.

Do we really want our every appearance in public to be tied to our identity, and broadcast at large, so that millions of people can know that we: (1) wore pajamas in public, when we put out the recycling; or (2) failed to sneeze into our elbows, as good health practices would require; or (3) let our dog walk off leash; or (4) etc.? The possibilities are endless.

This "pajama shaming" case should make us all aware, in case we haven't been paying attention, that facial recognition technologies, though useful in some cases, can have profoundly totalitarian effects.

This is just a "heads up." If we don't pay attention to the warnings issued by groups like the ACLU or the Electronic Frontier Foundation, we can wind up like the pajama-wearing grandmas of Suzhou. If we wire up all our doorbells to the local police department, I think we are going to find that totalitarian misuses of the information collected will abound!