#74 / It Is The Time To Put Away Childish Things 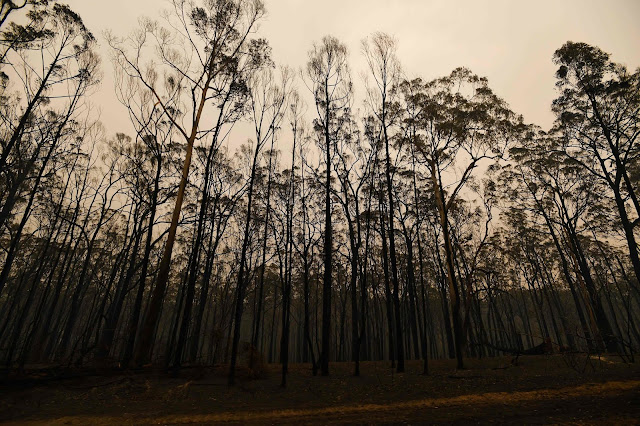 Lisa Pryor* has written a thoughtful column for The New York Times. Her article is titled, "Has Australia Reached a Climate Tipping Point?" Knowing that The Times can sometimes block access to non-subscribers, I am providing a few excerpts from her column, to give the flavor of what Pryor wants us to think about:

Sydney, Australia
Only a few months ago, I joked with friends who had just returned from life in the Northern Hemisphere that, with the state of the world at that moment, our distance from the rest of the world felt more like comfort than tyranny. Australia felt like a prosperous and benign island.

Life comes at you fast. We Australians found ourselves at the center of global events when our land erupted in flames. In recent months, fires have burned millions of acres, destroyed thousands of homes and killed at least 30 people. More than a billion animals perished.

In Sydney, it started long before summer with drought creeping up slowly, leaving scraps of yellow grass and dirt where lawns used to be. The government tightened water restrictions, and in my household we shaved our showers down to three minutes. We collected the tepid shower water in buckets, then hauled it out to the garden, trying to keep our sad plants alive.

Then came the fires. Smoke drifted across the city and refused to leave. At first, it was so strong and new that it woke me from sleep, and I wandered the house thinking it was coming from somewhere inside. On my morning walk, the bridges and high-rises in the distance almost disappeared, mere shapes in a fog.

The summer barbecue talk was all cognitive dissonance. “Aren’t the fires terrible? And so many animals lost; it’s heartbreaking. We need to do more about climate change. But anyway, how was your trip to Japan? We are thinking of taking the kids next year — was the snow OK?” Conversations of a country driven off a cliff, suspended in the air for one moment before the fall.

By late January, the smoke cleared a little. It was replaced by what my daughter calls “sky dirt,” blown in from inland dust storms. Sky dirt coated all the cars and houses in a fine, brown layer. Soon after, we swam in the surf and the sky was clear again, but the saltwater was flecked with tiny fragments of burned leaves.

Then came the floods and the heaviest rainfall in 30 years. Rain blew sideways, and the house creaked. We carted buckets in the opposite direction, bailing out our small lawn as it drowned in several inches of water. And it struck me that this — a sudden and opposite problem after months of drought — illustrated the impossibility of simply “adapting” to climate change.

How do you adapt when the changes coming are not simply new patterns but the very loss of a predictable pattern?

The time has come for us to put away childish things and reckon with climate change, to do what we can to prevent a future in which extreme weather is more intense and more frequent. This time around, it was Australia that suffered, that served as a warning of our planet’s climate change future. Many other places will follow in the coming years.

The question I have been asking myself is, what does it matter that I accept the science of climate change if I continue to live my life as if climate change were a hoax?

As Pryor so accurately reports, one of the consequences of the firestorms in Australia was that "more than a billion animals perished." That is "billion" with a "B." The horror of the times in which we live (while we still do live) has had a tendency to immobilize us.

Pryor captures this phenomenon well, as she describes life as experienced by middle-class persons who are employed, have housing, and food, and meaningful work. After discussions about the fires have reached their natural ending point, when nobody has anything much left to say, the next topic to be addressed is those foreign vacations planned for future years.

Isn't Pryor's question to herself the question we all should be asking:

These are, truly, horrible times, but interesting and exciting times, too, We are going to learn whether we can rise to the occasion, and whether we will make the changes we need to make, both individually and collectively, that will allow our human civilization to continue.

As I think I have reported in my blog postings before, one of my favorite Bob Dylan songs is "Mississippi." You can click that link to listen to it, if you are not familiar with the song. Here's a link to the lyrics.

My favorite lines (the first ones I have quoted, below) are immediately followed by some other ones, which I remembered when I read Pryor's column:

Well my ship’s been split to splinters and it’s sinking fast
I’m drownin’ in the poison, got no future, got no past
But my heart is not weary, it’s light and it’s free
I’ve got nothin’ but affection for all those who’ve sailed with me

Everybody movin’ if they ain’t already there

Everybody got to move somewhere
Stick with me baby, stick with me anyhow
Things should start to get interesting right about now

This is not a time to pretend that things are fine, or to avoid the difficulties in which we find ourselves. Our ship has been well and truly stove, all "split to splinters."

But this is also not a time to capitulate to the perceived inevitabilities that immobilize us, either, and that conspire to make us believe that our self-created disaster is inescapable. We need to "move!"

Pryor's reference to the Bible seems right on target to me. It is time to put away childish things, to face the facts of our situation, and to take action appropriately.

We all need to realize, along with Lisa Pryor, that if we know what climate change and global warming are doing; if we know what they portend (and we all do), then it is time to start making those changes we can. As we contemplate those changes we need to make, we must inevitably conclude, with Lisa Pryor, that we need to "move," that we "ain't already there."

A massive challenge confronts us. It is a challenge so great that we sometimes tell ourselves, to find relief, that there is nothing we can do. That thought, if we allow it, leaves us immobilized, and that is not a helpful reaction. We need to "move," and to make changes, and to be able to do that, we need to keep our spirits up, despite our splintered ship.

So, to keep our spirits up, let's remember that if we will just stick to it, "things should start to get interesting right about now!"