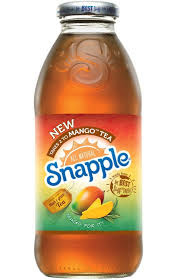 I am willing to take knowledge where I find it. I recommend the principle!

What about finding knowledge inside a Snapple Ice Tea bottle cap? Well, I picked one up a while back, and it told me this: 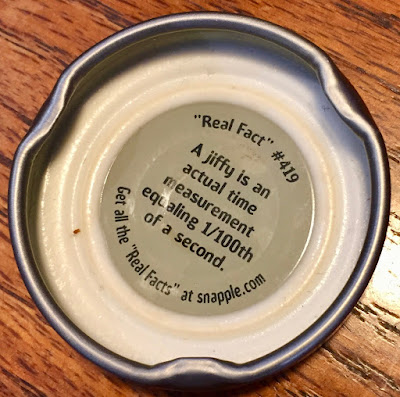 That Snapple advisory was definitely news to me. Before picking up that bottle cap, I knew the word "jiffy" only as a synonym for "a very short period of time." That's what that oft-consulted Merriam-Webster Online Dictionary says about the word "jiffy." Other online dictionaries produce similar definitions. For instance, Google's built-in dictionary gives you this: "jiffy" is "a moment."


After consulting various online (and offline) dictionaries, I was coming to the conclusion that the information provided by the Snapple bottle cap was bogus. However, it turned out that further online research backed up Snapple's claim. Using one of those "ask a question" websites (funtrivia), I learned this:

The term "jiffy" is sometimes used in computer animation as a method of defining playback rate, with the delay interval between individual frames specified in 1/100th-of-a-second (10 ms) jiffies.

Wikipedia gives a definition of "jiffy" that does the funtrivia website one better, providing this information:


Jiffy is an informal term for any unspecified short period, as in "I will be back in a jiffy." From this it has acquired a number of more precise applications for short, very short, extremely short, ultra short or hyper short periods of time.

The earliest technical usage for jiffy was defined by Gilbert Newton Lewis (1875–1946). He proposed a unit of time called the "jiffy" which was equal to the time it takes light to travel one centimeter in a vacuum (approximately 33.3564 picoseconds). It has since been redefined for different measurements depending on the field of study ...

The term "jiffy" is sometimes used in computer animation as a method of defining playback rate, with the delay interval between individual frames specified in 1/100th-of-a-second (10 ms) jiffies, particularly in Autodesk Animator .FLI sequences (one global frame frequency setting) and animated Compuserve .GIF images (each frame having an individually defined display time measured in 1/100 s).


Since I am neither a physicist nor a computer animator, I will be sticking with "jiffy" as a "very short period of time." However, it's nice to know that this general statement has now precipitated into some very specific measuring tools, when needed for "more precise applications."

Like I said, I am willing to take knowledge where I find it. Even inside a bottle cap!

Click this link for more "fun facts" from Snapple.