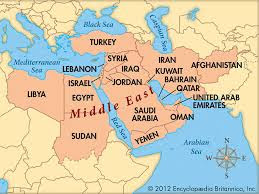 Quoting from Wikipedia, the basic idea is that NATO's independent member states "agree to mutual defense in response to an attack by any external party." If we think back to the origins of World War II, and to the ramping up of the "Cold War" that followed it, it is clear that NATO was intended to be a tool designed to prevent future military conflicts among European nations, and also to deter any possible Soviet military aggression in Europe.

In a Wall Street Journal article that appeared in yesterday's paper, we learn that President Trump has now called for NATO to expand its operations into the Middle East. That would appear, at least to my eyes, to reconfigure the original idea of "mutual self-defense," in Europe, into a more proactive military alliance to help the United States run the world.

Here is what The Wall Street Journal article says about the president's specific remarks:

President Trump called for the North Atlantic Treaty Organization to boost its role in the Middle East, in what would be a shift in the alliance’s mission, even suggesting a rebranding of the 71-year-old alliance.

“NATO, right, and then you have me, Middle East,” the president said at the White House on Thursday. “NATO-ME. What a beautiful name. I think NATO should be expanded and we should include the Middle East. Absolutely.”

This article made me shake my head with bemusement. Granting that it might be appropriate to consider a reconfiguration of how NATO operates, the way the president put the proposition was "typical Trump." With our current president, it's always about the "ME."

Let's concede that the guy does have a sense of humor of some kind, however. As he professed how much he likes the proposed new name, "NATO-ME," it is pretty clear that the president is playing with the acronym, and undoubtedly intentionally. "ME" may be translated to "Middle East," but Trump knows his own reputation, and that everyone will assume that the new name he is suggesting is a NATO-ME in which the "ME" means Donald Trump. "What a beautiful name!"

Recent events have made it crystal clear that our president does not believe that the initiation of United States military action in the Middle East (or anywhere else) needs to be checked out with our elected representatives in Congress. Thus, expanding the NATO mission to include military action in the Middle East really would be a way to grant our president an expanded military authority, on a personal basis, even beyond what he now asserts.

Decisions about going to war should not be about the "ME," they should be about the "WE." That's why the Constitution says that only the Congress can declare war.

Let's keep it that way! That's what I think.