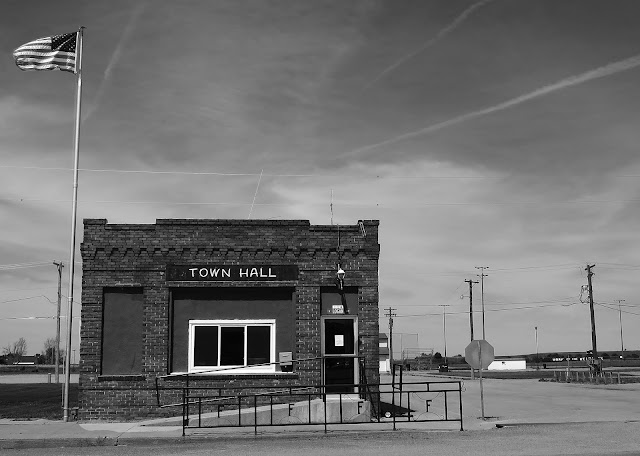 I really like The Sun magazine. In its November 2019 issue, The Sun published an article entitled, "An Imperfect Union - Astra Taylor on the Inherent Conflict Between Capitalism and Democracy."

Taylor is a young activist filmmaker who has recently directed a documentary film, "What is Democracy?" The  film is based on conversations that Taylor had, on camera, with all sorts of people, from throughout the United States. The article in The Sun is a transcript of a conversation between Taylor and Finn Cohen, who is a Professor in the Journalism department at the University of North Carolina at Chapel Hill. If you check out Finn on "Rate My Professors," you find that Finn is "caring," a "tough grader," "inspirational," and that if you "skip class you won't pass." Sounds like my kind of a guy!

The picture above, from the article, is supposed to illustrate the "democracy" part of "democracy versus capitalism." In The Sun, the pictures are always pretty extraordinary. You get the feeling with this one that "democracy" is kind of isolated, forgottten, and alone - but still made out of solid brick!

Here is a quote from the Cohen-Taylor conversation that made me scared. Taylor said it made her scared, too:

When I was making What Is Democracy? I interviewed some young Republicans. I don’t normally talk to twenty-two-year-old Trump supporters, and I assumed that they were going to give me the conservative spiel that democracy is free markets and everyone having a chance to duke it out in the marketplace and trickle-down economics and blah, blah, blah. Instead they told me they don’t like democracy, because democracy is about the majority wanting to improve their situation, and they, the young Republicans, are part of a minority of affluent white people. They literally mocked democracy on camera; that scared me.

They see capitalism as more valuable than democracy, because capitalism benefits them. And if the masses are empowered, they’re going to want to take rich white people down a peg. These young Republicans recognize that their status is dependent on others being impoverished. They recognize that if we had a popular vote in this country, and not the Electoral College, Republicans would not win the presidency. They recognize that controlling a majority of seats on the Supreme Court is essential to imposing their agenda. It’s not going to happen through mobilizing voters, because the policies they support are genuinely not popular.

What’s increasingly clear is that the far Right is abandoning democracy. It sees democracy as the enemy. It is a politics of aristocracy, a politics of hierarchy. I have gone on deep dives into far-Right subcultures online, and what they hate about democracy is the idea of equality at the center of it.

I do not see the problem of our time as one of populism and an overly passionate majority. I see the problem as an affluent minority who are tired of democracy and the equality that it demands. You find this in the bowels of the Internet, but you also find it in mainstream conservative thinkers like George Will. On the surface his new book looks like a standard-issue political treatise, but he’s basically saying that democracy has gone too far and is at odds with American conservatism. During the Cold War it was easy for conservatives to promote U.S. democracy over Soviet communism, but now that democracy means including all these groups and sharing resources and expanding the government, conservatives are going back to their roots and saying democracy is a problem.

"Democracy" is premised on the proposition that we are "all in this life together," and that this existential reality is the basis for the need to provide equal treatment to all.

The corrosive nature of "individualism," of an analysis that seeks to understand all things from an "individual" perspective, and that rejects the idea that we are "in this together," is a prescription for the end of the human world.

And why is that? Because somethings are true and other things are false. It is false to believe that we can survive if we act only on the basis of what gains we might make individually, failing to notice that we all, as individuals, will survive or perish only as we can act in ways that provide common benefit.

And what's the proof that I am right?

Ladies and gentlemen, I give you global warming (covered at length in The Sun's October 2019 issue, from which the picture below is taken).

We will either find ways to cooperate, and change what we are doing, collectively, on a worldwide basis, or we will all perish in the aftermath of heat waves and fire, hurricanes and floods! 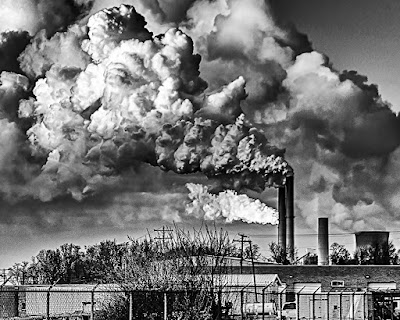