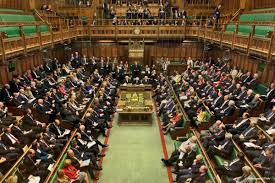 The New Yorker, in my opinion, is a serious source of relevant, important, and informed political, social, economic, and cultural commentary. If I had to choose just one link to an understanding of our economics, politics, and culture, I think The New Yorker is the "single source" I would choose as a way to maintain my personal engagement with what is going on, intellectually and otherwise, in the United States of America. The magazine also serves, to some lesser but still very significant degree, as a weekly tutorial about what is going on in the world at large.

As an example, in the magazine's November 4, 2019 issue, I found an article by Sam Knight, "The Long Goodbye." This article is an excellent discussion of the "Brexit" debate in Great Britain. Online, Knight's article is titled, "How Brexit Will End." Those interested in that topic are definitely encouraged to click the link I have provided, and to get Knight's view. Among other things, Knight quotes a former close colleague's description of Prime Minister Boris Johnson as follows:

He is genuinely a bad person. Not an unlikable person but a bad person, as in he has no morals, no principles and beliefs.

This statement reminds me of yet another head of state, closer to home. You know to whom I refer.

The Knight article made me start thinking about the differences (or the supposed differences) between the "parliamentary" system used in Great Britain and the system we employ here in the United States. Both systems are intended to advance democratic self-government, but these systems are, or seem to be, substantially different.

Many modern democracies, and certainly including Great Britain, are based on a system that makes an elected representative's party affiliation the paramount question for voters, when they vote to elect people to represent them in the government. In other words, representatives are chosen by the voters not so much for their personal qualifications or ideas, but on the basis of their party affiliation. Politics is "partisan" at the root. In fact, the party basically chooses who will represent the party in each electoral district. In a very real way, voters get to vote only for "parties," and not for "persons."

In parlimentary democracies, when one party doesn't have a majority in the legislative body, the various parties represented in that legislative body form alliances that will then allow whatever coalition comes together to "form a government," and thereafter to be in control of legislation. If and when a sufficient number of elected representatives refuse to vote with the party coalition in control, a new election is needed, to establish, again, a parlimentary majority. Israel is having a problem, right now, establishing such a parlimentary majority, even after two recent national elections. A third such election may be coming up soon.

In our system, people vote for the "person," not the "party." At least, that is the way the system is designed to work, and the way it is most usually described. This should, one might think, avoid the kind of political "partisanship" that can be so debilitating to our efforts to achieve a successful and democratic system of self-government.

Whatever the theory, few would disagree, I think, that our current politics is "partisan" above all else, and that voters have come to accept that this is just the way our system works. I would like to suggest that we need to reexamine our willingness to make "party" primary. There is a good argument that we can only truly achieve democratic self-government (in our system) by downgrading the power of political parties, and by putting "the people" back in control. Maybe that's called "populism," but whatever it is called, it seems obvious to me that one of the reasons that our government is so dysfunctional today is not only that our president is "genuinely a bad person" (which I think he is), but because we are actually trying to operate our government under a partisan-based quasi-parlimentary system, which does not mesh very well with the system specified in our constitution. Our elections, for instance, are set by the calendar, not by when a former majority coalition in the legislature loses internal support.

The "political polarization" that is greatly decried in political discussion today is associated with the idea that political "parties" are the places where political decisions are made. Republicans in the Senate, operating under party rule, decided not to consider Supreme Court nominations made by President Obama, given that he was a president from the opposite party. And who doubts, going forward, that the Democrats might well do exactly the same thing, if the Senate were Democratic after the 2020 election, and if President Trump, reelected, attempted to appoint a replacement for Ruth Bader Ginsburg, should she leave the Court? I, personally, would be surprised to find any substantial number of Democrats objecting, should that happen.

Party-based decision making is a "feature not a bug" in a parlimentary system. In our system, though,  it is not only a "bug," it is an infectious vector of political disease that undermines the integrity of our entire democratic system. A polarized and partisan politics makes ordinary people decide that government is "corrupt," and unresponsive as a matter of fundamental design. Naturally, voters who decide that this is how our government should be understood become cynical, and stop participating. We turn into a nation of "spectators" not "actors," and this reaction, extended over decades, has led us straight into our current dysfuncctional government, and is moving us on to tyranny.

In the House of Representatives, there are 435 voting members. Our system of government presumes that these elected representatives will make their first priority pleasing the voters in their individual districts. That should lead to a tapestry of opinion among elected representatives, as each officeholder focuses, first, on what the voters in that representative's district care about. Quite the opposite, however, is how the system is currently working. Members of Congress depend on funding that comes through their party, and it is the party, not the voters in their district, to which our elected representatives have to pledge their allegience. Once in a while, someone like Alexandria Ocasio-Cortez shows that a politics based on responsiveness to local voters is still possible. If that were the way it worked almost everywhere, there would be a lot less "partisanship" in our Congress. There would be a lot less "polarization."

That kind of politics, however, "of, by, and for the people," means that ordinary voters need to get engaged, themselves, in our system of self-government. If we relate to our government as "spectators," forgetting that it is, indeed, OUR government, and if we forget that WE ARE THE GOVERNMENT, the results will be bad. Our system is not a parlimentary system, a political system that looks to the party for policy and solutions. We look to individual people, which is why, in the current Democratic Party Presidential Primary, Bernie Sanders and Elizabeth Warren, who advance policy positions that are not "party-certified," are so wonderfully popular. They can't get elected? Well, in a system that lets the party decide who gets elected, we won't get the chance to see what the people say. We saw how that worked out in 2016.

Our current partisan and party-based system is also why President Trump, whom I do believe is "genuinely a bad person," has been able to take the government in such unbelievable directions. As the head of the party, he calls the shots - whatever they are. Putting children in cages? Trading foreign military assistance for political assistance with an upcoming campaign? Denying the fact that global warming is posing an existential threat, and that we need to take our foot off the hydrocarbon gas pedal, not push it further to the floor? If that's what the head of the party calls for, elected representatives who put party before the ideas and feelings of their local constituents makes bad government not only possible, but inevitable. It makes it "durable," too. Our currently dysfunctional system seems so durable, at this point, that ordinary men and women are discouraged from the kind of personal political participation that could change these realities.

Continuing to elevate party over policy, as we debate and decide our political future, will take us towards tyranny. Just take a look around. That's where we seem to be headed.