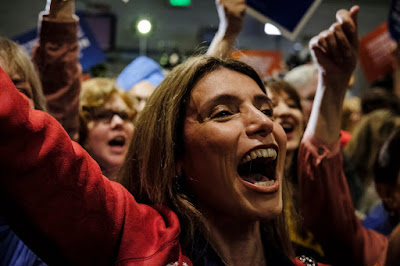 Pictured above is a scene from a political celebration that took place on Tuesday, November 5th (or maybe the photo was taken early on Wednesday morning, November 6th, I am not sure). The photo shows supporters of Ghazla Hashmi on election night in Richmond, Virginia. Hashmi, born in 1964, was just elected to Virginia's 10th State Senate District. She is the first Muslim woman ever elected to the State Senate in Virginia. The photo, above, accompanied a column in The New York Times (hard copy version): "Democrats Turned Virginia Blue. Next?"

I am delighted by most of the recent election results, and that includes being delighted by Hashmi's victory in Virginia. I do, however, want to make one point. As Democrats party on, and ask, "Who's Next?" I think we need to examine the whole concept of "party" as our best way of evaluating the state of our politics.

As evidenced by The Times' headline, political decisions are frequently color-coded, with "red" states turning "blue," or (heaven forbid) the opposite. These two colors represent, of course, our two major political parties, the Red Republicans and the Blue Democrats. I am definitely "Blue," if not a "blue blood," but I do want to make a point about "party."

We have tended to organize our politics by "party." This is particularly true at the national and state levels, but there is a "non-partisan" brand of politics, as well, which is mostly found at the "local" level. I, for instance, self-identify as a "politician," having served for twenty years as a local elected official in Santa Cruz County, California. I was elected five different times, in highly contested elections, but my "party" affiliation was never an issue, since County Supervisors hold a non-partisan office. I can't tell you how happy I am that I was never put into a "party" category, as voters evaluated my positions and my record.

One important part of politics is making clear that there are different choices to be made about what we should do. Political parties do help make that clear, and thus facilitate our efforts to make political choices. All to the good! However, as we have pursued our politics, and made difficult political choices at a time when the political choices have momentous consequences, we find that we have created a politics that is ever more deeply divided along partisan (and color-coded) lines. That may not be the best thing!

If the "divisions" we highlight, for the purpose of making political choices, come to be seen as fundamental realities, dyed into the actual nature of things (as "red" and "blue" might permeate every fiber of the social tapestry), it may be hard to remember that while differences are real, and need to be understood as we make political choices, we are also, in the end, "together in this."

"Division" is not, in fact, the only (and perhaps not even the most important) reality of our political life. We are not only "divided," but we are commonly joined in a society that can cohere and function only on the basis of shared effort, cooperration, and mutual tolerance. While a politics that admits of no differences is fundamentally flawed (we call that kind of politics "totalitarian"), also flawed is a politics that posits political differences as fundamental, deep-dyed, and irrevocable. I fear our contemporary and very "partisan" politics is more and more reflective of this idea about the nature of our political relationships.

"Division" is a word that is used not only to refer to opposing groups. The word is actually used, less frequently, true, to mean the act of voting itself, the act of chosing one possibility over another. I want to urge us to catalogue our political "divisions" as reflecting political choices made in the past, not as fundamental realities that identify and determine which persons, districts, or states are to be placed in which, quasi-permanent, category.

A belief that our political divisions are quasi-permanent (which is what we tend to see in our politics today, with entire states or districts being categorized as either "red" or "blue"), is a belief that is inevitably destructive of something that is critically important in our political life; namely, the recognition that we  all inhabit one body politic, and that we are, as I said above, all "in this together."

Responding to global warming, or income inequality, or racial injustice, or dealing with the infrastructure that we have failed, collectively, to maintain, and that is now failing us, can never be successfully accomplished if our politics is defined by "red" and "blue," with deep-dyed partisanship being accepted as the ultimate truth of who we are.

I believe that this is a point worth making, and in terms of political participation and civic engagement, it is my belief that most Americans understand that this is true, and understand it at a  deep and profound level. This was, in fact, the truth that made it possible for us to elect our first black president, in 2008.

If we want to work together to save human civilization and the natural environment, and to create a just and fair society, it won't be by turning one state, or district, "red" or "blue."

Wake me up when the party's over, in other words!

I think that millions of Americans are thinking about politics in just that way. They are ready to wake up, and to engage, but they'll engage, and become active in efforts to confront local, state, and national issues only when we have been able to escape the extreme partisanship that infects our contemporary politics.

There is a lot to be done, and not much time. We had better all wake up!