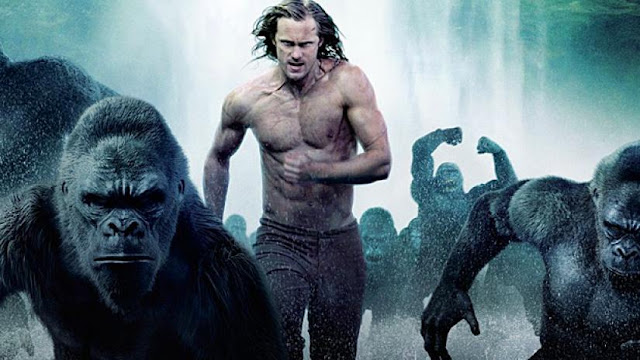 On October 4, 2019, The Wall Street Journal ran a column by Lance Morrow. This column advanced a new way to think about the realities of our legal/political situation.

Readers might or might not be able to pierce The Journal's paywall, to get the column in its entirety (click right here to try). In short, as illustrated by the quotation below, Morrow suggests that the current impeachment inquiry is premised on an outdated understanding of the legal/political world in which we actually live:

Donald Trump studied at the Edgar Rice Burroughs School of Law, under Prof. Roy Cohn, among others. The law of the jungle is not the same law—elaborate, pettifogging, civilizing—that constrains the elites. Who is to say that the Burroughs School of Law is wrong in its approach to a world that is dangerous, uncertain and unjust? It turned young Lord Greystoke into Tarzan and Mr. Trump into the 45th president of the United States.

The "Law of the Jungle," in other words, is the real "law" that governs us at the moment, and we should just "get with the program." Efforts to call the nation to respect the kind of law that Lincoln invoked in his appeal to the nation after the Civil War are almost certainly going to be unavailing. So, why even try?

In the absence of popular faith in 21st-Century American civilization and its institutions—or in the virtue of the country’s history, Lincoln’s “mystic chords of memory”—millions default to the Edgar Rice Burroughs model, a certain primitive warlord civics. In the jungle, old norms mean nothing. They may even be despised.

If you are not immediately willing to agree that America is, at the moment, committed to a "law of the jungle" approach to politics and public policy, then consider an alternative, also advanced by Morrow:

After the American defeat in Vietnam, after the abdication of Lyndon Johnson and its sequel in Watergate and the shipwreck of the Nixon administration—the American public mind came to entertain a knowing, outlaw sympathy for Vito Corleone and his family’s way of doing things. If much of government was a fraud and a delusion, there was visceral pleasure in beholding the don’s brutal but effective justice, his archaic code of honor that mocked the moralism of hypocritical elites ... In “The Godfather,” audiences beheld a warlord who made his own rules, a man of respect who arranged for a powerful Hollywood producer to wake up one morning in bed, among his silken sheets, bloodied from the severed head of his beautiful thoroughbred horse.

Morrow suggests that the impeachment inquiry now underway is probably ill-considered. As I get the argument, his concern is that the results of the inquiry will demonstrate, clearly and to one and all, that we no longer live in a country that believes in, or is willing to submit to, what has often been called the "Rule of Law."

Or, at least not our conventional understanding of what the "Rule of Law" requires. In fact, the way I read Morrow's column, we are ruled by the "Law of the Jungle," and "Mob Law," and we had better get used to it.

I, for one, am not willing to stipulate to that!