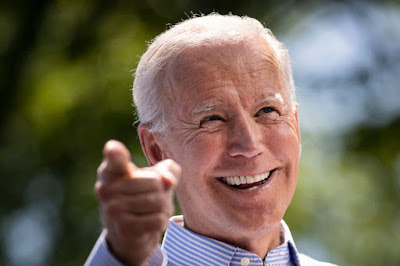 The sentiments featured in the headline above do not, necessarily, reflect my personal views. This is what the headline said on a column by Michelle Goldberg, published in the May 21, 2019, edition of The New York Times. A "pull quote" from that column adds some insight as to what she is writing about:

Biden makes his supporters feel safe, but nominating him is risky.

I basically agree with Kolhatkar and Goldberg. Read Goldberg's column to get some examples of why the "electability" approach to picking a candidate is not necessarily the right way to win elections.

Looking at things from a theoretical perspective, which is the way I tend to think about democratic self-government, the purpose of elections is to allow for debate and discussion about what the government should do, with each individual voter then casting his or her vote for the candidate whom the voter believes will best carry forward the particular policies that the voter prefers. If we are afraid to vote for candidates who will advance our own ideas of what the nation needs to do (because we decide that it is impossible for them to win), we are castrating the democratic process.

A political party that does that deserves to lose, and as Goldberg notes, such parties often do lose!

Goldberg doesn't mention the 2016 Democratic Party primary election, in which the Democratic National Committee did what it could to make sure that the person they thought most "electable" got the nomination (supposedly, Hillary Clinton). This is another example that could be added to her list. Here is Goldberg's bottom line:

Intensity — the thing that turns a campaign into a movement, that leads people to donate more than they can afford, host house parties and spend their free time knocking on the doors of strangers’ houses — matters. That’s especially true in a country as polarized as ours, where turnout is as important as persuasion. Ultimately, the paradox of primaries is that it’s most strategic to ignore the experts and follow your emotions.