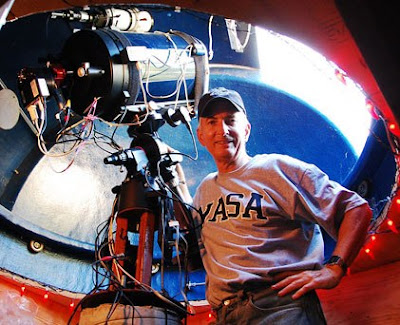 At that "third First Annual Gala Dinner" held by the Association of Faith Communities, a wonderful event that I wrote about in this blog on May 20th, one of the AFC honorees, who was sitting at my table, wanted to discuss the "Garrett Relation."

To cite Wikipedia, "the Garrett Relation is a hypothesized constant scaling between total past inflation adjusted global GDP spending, and current global power consumption. It was first identified in 2009 in a study by Tim Garrett of the forces controlling the evolution of world carbon dioxide emissions." Garrett teaches atmospheric science at the University of Utah.

It is fair to say that the so-called "Garrett Relation" is a pretty obscure concept, but it was recently brought to the attention of readers of the Santa Cruz Sentinel by a story that ran in our local newspaper on May 15, 2019. Richard Nolthenius (pictured above), who has been teaching astronomy at Cabrillo College for almost thirty-three years, gave a speech at the college in which he disscussed the Garrett Relation.

Click here for an introduction to the idea. Leaving aside the specific math and the measurements involved, I would characterize the "Garrett Relation" as documenting the fact that past actions continue to influence present behavior, and that our economy and other human processes have a built-in bias towards growth. Thus, the Garrett Relation makes clear that our past choices have a very significant "momentum," and that it is inevitably going to be quite difficult to turn any ongoing historical process into a new direction.

If we want to change what is happening, in other words, we need to overcome the significant momentum of past actions that will continue to carry us forward, to an end we don't want, even though we are truly trying to change. Garrett (and Nolthenius) are focused on the emission of greenhouse gases. The implications of their argument, at least as I understand it, is that we may be (literally) cooked.

My friend at the AFC dinner had read the Sentinel article, and he thought that it might be true that a similar thing could be said about homelessness. The momentum of past decisions that have led to our current homelessness crisis might have set up a process that is, as a practical matter, impossible to overcome. Homelessness will simply continue to grow, just as greenhouse gas emissions will continue to increase. At least, that's how I understood the idea he wanted to discuss. It is not a very happy idea!

I consider myself to be officially entangled with the idea of "growth," and particularly "exponential growth," and how we can (and should) relate to it. I am, after all, the author of Measure J, which is Santa Cruz County's official Growth Management System, established by a voter-enacted referendum that passed in 1978. My major political work, during the twenty years I was on the Santa Cruz County Board of Supervisors, was to attempt to change the patterns of exponential growth that existed when I took office in 1975, and that were fundamentally altered by the time I left office twenty years later.

If you want to put a name to the problem, calling it the "Garrret Relation" is just fine with me, but if I am properly understanding the concept, the essence of the Garrett Relation is that past actions continue in their course with a growing momentum that makes it exceedingly difficult for our society to change direction. Growth continues and compounds in an "exponential" way. However, this does not mean that the processes put in motion by past decisions cannot be changed. What it does mean is that to make changes in ongoing processes, a community or society must undertake a two-step process.

First, the community or society must make a firm decision that it does want to change direction, taking action to establish a set of rules that are properly designed to achieve the change in direction desired.

Second, the community and society needs to "hang on," and to continue to insist that those new rules be followed for as long as it takes to overcome the effects of past decisions (expressed in the case of greenhouse gas emissions by the "Garrett Relation"), and to create a new momentum taking our society in a different direction.

Both those things happened in Santa Cruz County between 1975 and 1995. I wrote Measure J (and a lot of other, associated rules), and then I "held on" as an elected official who was committed to changing past patterns of runaway growth. I held on for twenty years.

The way I see it, the "Garrett Relation" tells us what will happen if we don't demand and insist upon fundamental change, and if we don't maintain an absolute commitment to that kind of change over an extended period of time. Nothing is "inevitable" as long as we don't act like we are mere "observers" of something that is happening to us, and decide, instead, to "act" ourselves, and to make things happen the way we want.

Of course, actually making the changes needed, and then holding on for a long enough time to make absolutely certain that those changes will continue, is not easy! Quite the opposite! But is it possible? I think the answer is "yes." The two-step formula I outline above worked to stop exponential growth in Santa Cruz County. It can also work to eliminate homelessness and to stop runaway global warming. I am convinced of it.

I am convinced of it because this has been my personal experience, and I am not going to let any "Garrett Relation" convince me that we are, inevitably, "cooked."