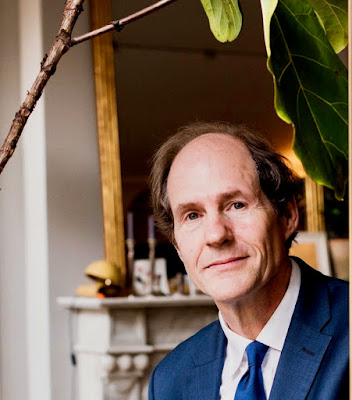 Cass Sunstein, pictured above, is a law professor at Harvard Law School. In case you'd like to place him in the firmament of our political life, I can tell you that his third wife is Samantha Power, who is best known as an apostle of military intervention in the name of human rights. Power was President Obama's Ambassador to the United Nations. Sunstein and Power met in connection with their involvement in the 2008 Obama presidential campaign. Later, Sunstein was a member of the advisory group set up by Obama to investigate and provide recommendations after Edward Snowden revealed that the government was spying on every one of us. The advisory group pretty much justified the practice.

Sunstein is also the author of a new book, How Change Happens. I haven't read it, though I did read what David Brooks had to say about it in a column that ran in The New York Times on Tuesday, April 9, 2019. Here is the essence of the Brooks' column:

Sunstein’s book is illuminating because it puts norms at the center of how we think about change. A culture is made up of norms — simple rules that govern what thoughts, emotions and behaviors are appropriate at what moment. It’s appropriate to be appalled when people hit their dogs. It’s inappropriate to ask strangers to tell you their income.

Most norms are invisible most of the time. They’re just the water in which we swim. We unconsciously absorb them by imitating those around us. We implicitly know that if we violate a norm, there will be a social cost, maybe even ostracism.

From time to time, a norm stops working or comes into dispute. People are slow to challenge a broad norm, because they don’t want to say anything that might make them unpopular. But eventually some people notice that, actually, there are a lot of people who secretly think a certain norm is wrong or outdated.

Sunstein points to the importance of “norm entrepreneurs,” people who challenge old norms and create new ones. I’d add that there are at least five different kinds of norm-shifters, though often one person can perform several of these roles:

Namers. These are people who describe the context in some new way. They describe the reality around us in a way that makes visible what had previously been invisible or taken for granted. Charles Dickens made the poor visible to Victorian England.

Confrontationalists. Social movements move forward by declaring disgraceful things that had formerly been acceptable: segregation, littering, sexual harassment, etc. They wake people up to the ways an old norm is disgraceful by actively and visibly confronting it. The civil rights movement had a strategy aimed at creating a soap opera every day: Do something every day that forces the segregationists to display their own hatefulness and the unjustness of their norms. This is how you rouse people.

Illuminators. If confrontationalists tear down old norms, illuminators lift up new ones. They do this by showing how cool and just the norm breakers are and thus encourage others to copy them. The 1960s radicals violated all sorts of norms, but it was illuminators like Ken Kesey, Bob Dylan and Janis Joplin who created the counterculture identity: This is who we are. This is the story we are all a part of. This is how we behave.

Conveners. These are people who organize gatherings for those who want to shift the same norm. These gatherings embolden change agents by reminding them, “There are a lot of us!” They sponsor specific actions you can do to embody new norms. Everybody should recycle.

Celebrities. When famous, good-looking or cool people embrace a norm-shift, you get a mass cascade. That’s when you win over all the people who may not be intrinsically interested in the cause, they just know that this is how the cool people think and act, so they want to do it, too.

We all have the power to create cultural microclimates around us, through the way we act and communicate. When a small group of people shift the way they show approval and disapproval, it can shift the social cures among wider and wider circles. Suddenly, revolutions. The whole school of fish has shifted course in rapid ways that would have astounded us beforehand.

I agree with Brooks about the power of "norms." I have characterized what Brooks is calling "norms" as "people doing what is expected." Most people do that, most of the time. We fulfill the expectations we acknowledge. One reason that our presidential "celebrity in chief" is driving everyone nuts is that he is definitely one of those "norm entrepreneurs" that Brooks mentions, and our president is suggesting that there aren't, really, any "norms" at all.

In such an environment, we need to be careful! Brooks' discussion about "norms" is a slightly different way of talking about how we are losing a sense of the "truth," to the point where we are moving to that state that Hannah Arendt tells us always accompanies totalitarianism: a state in which "everyting is possible and nothing is true."

A few blog postings back, I was insisting that "Honesty is Still in Style." I do believe it, and we need collectively to insist on the standards that we want to follow. In all our family and social interactions, we need to let others know that we expect certain kinds of behavior. Think about it like you are introducing an acquaintance to a friend.