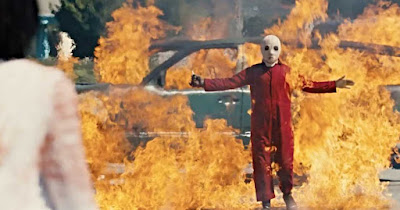 Us, a new horror movie, is described as "coming from the mind of Jordan Peele." The story takes place in Santa Cruz, and the picture above shows one of the prototypical Santa Cruz scenes. You are forgiven if you don't immediately identify the location of the burning car. This burning car scene takes place on East Cliff Drive, right after it turns to the left, after coming off Murray Street, and as East Cliff traces the edge of the bluffs above Seabright Beach. In the movie, you won't have any problem picking out this and other locations. A lot of the action takes place at the Boardwalk.

I am not a horror movie fan, at all, but since my son shows up in this film, near the end (or so he tells me), I did feel obliged to try to pick him out of the crowd. In fact, since my son appears in and among about a hundred people, all holding hands, and dressed in red, I am not actually sure I properly identified him. I did well know the location, though, on the main beach, in the lagoon that forms at the mouth of the San Lorenzo River. My son is somewhere, I am assured, in that long line of red-clothed men and women, seen from afar.

I don't think I would have gone to see the movie just to try to get that glimpse of my son in that single, long-distance scene. What actually sent me to the movies on a Friday afternoon was a review that appeared in the March 22, 2019, edition of The Wall Street Journal. Joe Morgenstern, The Journal's movie critic, called Us "double-dealing at its dazzling best." This is, in fact, a movie about doppelgängers, and it poses some intellectual challenges. Before the red-dressed doppelgängers show up, filled with anger and hostility, we meet a pretty ordinary family, heading for a Santa Cruz vacation. After the doubles appear, it's a duel to the death, and the real question is "who is fighting whom, and why?" Who or what do these doubles represent?

In view of the fact that the family being most directly challenged by their doubles is black, and that the hostile doppelgängers (also black) identify themselves as "Americans," a commentary on race relations is clear. But there may be a few more layers. The Morgenstern review, withholding the "reveal" that comes at the very end of the movie, suggests that the movie is really about psychology and existential fear. Because of the review, I wanted to understand what that surprise ending was, and what it might mean. I ended up thinking the movie intends to make us have empathy for others by showing us that we are all compounded of both good and evil, and that any effort to try to suppress either of these aspects of who we are will turn us into genuine monsters.

So, here is my quick movie review: Us is fun for those who know Santa Cruz because not only is it filmed in Santa Cruz, the story is completely and explicitly centered on Santa Cruz. The Santa Cruz community is where the movie starts and ends, and everything in-between is Santa Cruz, too.

Besides that (and I was able to let the "horror" just pass me by), the film is intellectually worthwhile. As the title suggests, it is all about "us."