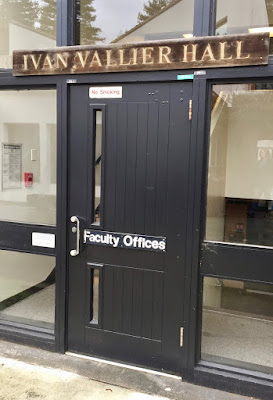 This Quarter, I am teaching a course at the University of California, Santa Cruz. The course is called "Introduction To Legal Process." Last Tuesday, as I came up to the campus to prepare for class, rain was pouring down, and I had to find a new place to park. All the close-in spaces I normally utilize were completely spoken for. Thus, sprinting through the raindrops to reach my office, and coming from a different direction from normal, I entered the building where my office is located through a door I rarely use. As I did so, I suddenly realized that I didn't know anything at all about Ivan Vallier.

My office on the UCSC campus is located in Ivan Vallier Hall. Since Crown College is the "science" college at UCSC, I had always assumed that Ivan Vallier was some sort of physicist, or something like that. Other nearby buildings at Crown bear the names of famous scientists. There are, for instance, dormitories named "Harvey," "Maxwell," "Leonardo," "Galen," "Galileo," "Rutherford," "Descartes," and "Gauss." Even though I am no scientist, I recognize those names. I had always assumed that "Vallier" was just another one, but if he was, what the heck did Vallier do? As I came through the doorway with his name above it, my refuge from the rain, I decided to look him up.

As it turns out, Ivan Vallier was not a physicist. He was a beloved professor of sociology, a member of the faculty at Crown College when UCSC was actually organized and operated on the "college system." Vallier died, tragically young, at age forty-seven, in 1974. A very nice tribute to him, by Brewster Smith and Kenneth Thimann, can be found online. Just click that link.

Since I teach in the social sciences, I was pleased to find (however late-breaking the news) that my office is located in a building named for and dedicated to a scholar in the social sciences. I also appreciate that Vallier was "deeply interested in the welfare of students," and that he "would have made an outstanding judge." I always felt a bit out of place in the "science" college. It's nice to know that Ivan Vallier Hall is, actually, an appropriate home away from home for someone like me. I am very happy to have looked him up! Now I know something about Ivan Vallier - and if you have read this blog post, so do you!