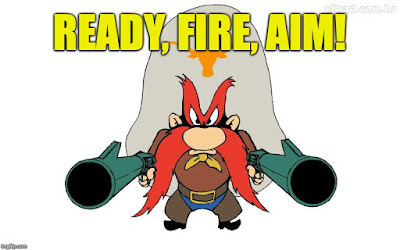 When I first heard the phrase, "Ready, Fire, Aim," this expression was emphatically not the title of a self-help book.* The expression is intended to represent a warning that it doesn't make much sense to start doing things that have consequences before you have thought through the implications of what you are doing. The right way to do things is to "aim" before you "fire."


I was thinking about the "Ready, Fire, Aim" phrase, recently, in connection with my online textbook on American Law, which I am using for my "Introduction to Legal Process" class at the University of California, Santa Cruz.

Maybe this explanation will be helpful for anyone who sees the CEQA process as an obstacle, instead of an advantage:

Once the Draft environmental document has been prepared (a Draft EIS or a Draft EIR), the government then needs to let the public comment on the draft, giving members of the public no fewer than thirty days to review and submit any comments they might have. Longer review periods are often provided.

At the end of the review period, the government must review all the comments received on the draft, and then respond to those comments, with the responses including detail sufficient to address the issues raised by the comments.

The “Final” environmental document (a Final EIS or a Final EIR) will include the original draft document, plus any comments received on that draft, plus responsesto all the comments received. Generally, a Final EIS or EIR will also include a listing of various mitigation measuresthat would eliminate or reduce, to the greatest degree feasible, any adverse environmental impacts that the analysis has identified.

By the time this process is complete, the governmental agency will definitely have “thought” about the project. If the agency decides to go ahead, it will do so with full information on any adverse impacts that may have been identified. Members of the public, who will have been involved in the process, will usually be at the meeting where the final decision is made, and if the impacts are adverse, and the government goes ahead anyway, the elected officials responsible are almost certainly going to hear from the public, and the public is likely to be upset.

“Stop and Think” statutes, like NEPA and CEQA, almost always lead to better environmental decision making. Public comments and suggestions can be incorporated, the original project can be redesigned to eliminate or reduce impacts, and mitigation measures can be identified, so that they are incorporated into the final decision, thus improving the project from an environmental point of view.

__________________________________________________
* In fact, I was amazed to find, as I sought for online references to the "Ready, Fire, Aim" phrase, that there is a self-help book that advocates this principle. The book was written by a young tech guy named Michael Masterson, and he thinks that applying the "ready, fire, aim" principle is a way to get rich. I haven't read the book, but it seems like the advice is a species of that "move fast and break things" approach to policy making, and reflects the insufferable arrogance of those really, really rich guys who think that money equals intelligence. 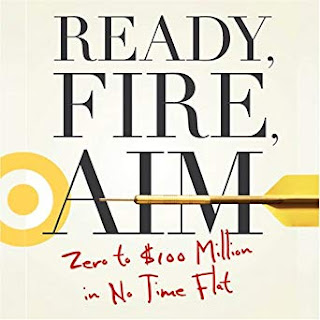