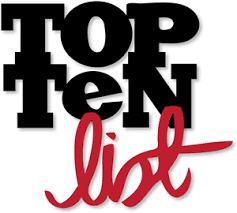 Business Insider credits former late-night host David Letterman with promoting "Top Ten" lists. The way Letterman did it, he counted down from ten to one.

Marc A. Thiessen, a conservative columnist who writes for The Washington Post, has now produced a "Top Ten" list for Donald Trump. Take a look at it by clicking the link. This is the "good" Top Ten. Thiessen has also produced a "bad" Top Ten list for Mr. Trump. I am pretty much in agrement with all the examples on the "bad" items list, but I do want to admit that the "good" list does seem pretty good:

#10 - He has secured the release of 19 people, including 16 Americans, from foreign captivity. When Pastor Andrew Brunson was freed by Turkey, he became the 19th captive released thanks to Trump.

#9 - He delivered for the “forgotten Americans.” The Trump boom is benefiting those left behind by the Obama economy. Manufacturing jobs grew at the fastest rate in 23 years and the unemployment rate for Americans without a high school diploma reached the lowest point ever recorded. The Wall Street Journal reports that wages rose 3.1 percent — the biggest jump since 2009 — and that “low-skilled workers are among the biggest beneficiaries.” ....

Thiessen's list goes on from there. I will leave it up to you to read "Trump's Top Ten" in its entirety. For the moment, I want to suggest something important for those politicians from the progressive or Democratic Party side who will be trying to wrest the presidency away from Donald Trump in 2020. I am not one who thinks that is going to be easy.

Here's my suggestion: concede some of the "good" things that the President has done. I happen to live with an English teacher and former debate champion who has taught me, over the years, about rhetoric (i.e., what makes for a strong argument). Logos, ethos, pathos. Got to have those. AND, you have to make a concession. Conceding that an opponent has some good points is the way to strengthen your own argument. Lots of people (Marc A. Thiessen is speaking for them) appreciate a lot of things the president has done.

If a candidate wants to defeat Donald Trump, that candidate is going to have to figure out a way to make some concessions, while still winning the argument on the main point: our country needs a new president! I am a little nervous that the obvious "bad" list will seem so compelling that the candidates to replace our current president will forget they need to make those concessions, in order to win the argument!