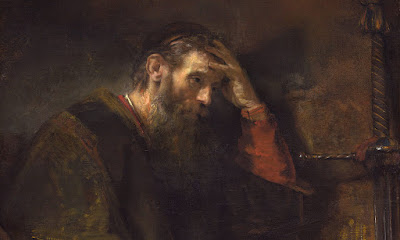 The picture, above, is a detail from The Apostle Paul by Rembrandt van Rijn (c1675). It appeared with an article in the online publication Aeon, courtesy of the National Gallery of Art (and Wikipedia). The article, wrtitten by David Bentley Hart, was titled, "Everything you know about the Gospel of Paul is likely wrong."

Here is the gist of Hart's argument:

Ask ... the average American Christian – say, some genial Presbyterian who attends church regularly and owns a New International Version of the Bible – what gospel the Apostle Paul preached. The reply will fall along predictable lines: human beings, bearing the guilt of original sin and destined for eternal hell, cannot save themselves through good deeds, or make themselves acceptable to God; yet God, in his mercy, sent the eternal Son to offer himself up for our sins, and the righteousness of Christ has been graciously imputed or imparted to all who have faith.

Some details might vary, but not the basic story. And, admittedly, much of the tale’s language is reminiscent of terms used by Paul, at least as filtered through certain conventional translations; but it is a fantasy. It presumes elements of later Christian belief absent from Paul’s own writings. Some of these (like the idea that humans are born damnably guilty in God’s eyes, or that good deeds are not required for salvation) arise from a history of misleading translations. Others (like the concept of an eternal hell of conscious torment) are entirely imagined, attributed to Paul on the basis of some mistaken picture of what the New Testament as a whole teaches. Paul’s actual teachings, however, as taken directly from the Greek of his letters, emphasise neither original guilt nor imputed righteousness (he believed in neither), but rather the overthrow of bad angels.


Harking back to my posting yesterday, Hart is essentially saying that Paul claimed, "No stain. No pain." That's "Good news," indeed!

If you are in a mood for some theology on Christmas, check out Hart's article.