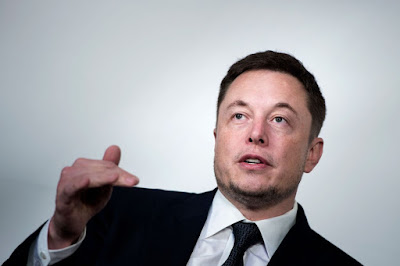 An article in the Saturday, September 29, 2018, edition of The New York Times was fascinating to me.  For those who may not be totally up to speed on the latest "Musk News," you should know that the Securities and Exchange Commission filed a lawsuit against Musk, seeking an order that would prohibit him from acting as the C.E.O. of Tesla.*

The picture above was taken from a short opinion piece in The Wall Street Journal, dated in August, before the S.E.C. took action. It was written by Harvey L. Pitt, who was chairman of the S.E.C. from 2001-03.  Mr. Pitt's Wall Street Journal statement indicates why such a lawsuit, charging Musk with fraud, should be no surprise to anyone. In short, Musk's public claim that he had "funding secured" for a buyout of current Tesla stockholders was apparently fraudulent, and the untruth of his statement was "flagrant." Pitt predicted, in August, and in contradiction to other informed persons mentioned in his statement, that the S.E.C. would not take this lightly and would proceed against Musk.

The more recent New York Times article outlines what actually happened subsequent to Pitt's statement of informed opinion. In fact, the S.E.C. did not move directly to its lawsuit, charging Musk with securities fraud, but tried to "settle" its grievance against Musk. A proposed settlement, agreed to by the S.E.C., did not contain any admission by Musk that he had done something wrong, but it also did not contain a statement that Musk was blameless in leading investors, and others in the public, to believe something that wasn't true. Because the proposed settlement didn't ratify the behavior that Mr. Pitt called "flagrant," and behavior that seems, on the face of it, to have been "fraudulent," Musk walked away from a settlement that would have avoided the lawsuit that now threatens to bring down not only Musk, but Tesla, and then perhaps his other companies, too.

What was fascinating to me about the article in The Times is the fact that Musk, quite clearly, was arguing for an ability to make factually untrue statements on the basis that the "facts" were what he thought and not a real-world reality divorced from his own subjective interpretation of the real.

Does this remind you of our president? Musk claimed, in a Tweet, that he had "funding secured" for a buyout of current Tesla stockholders at a price significantly above the stock's then-current price. People who believed him made financial decisions based on this claim, which was false.

True, Musk had talked to some people in Saudi Arabia who "could" have provided the funding that he so boldly claimed was "secured," but there was no written commitment, and the funding was not "secured" at all. Making such a statement was a textbook violation of the securities laws. It was, in fact, securities fraud. Pitt is right that the S.E.C. shouldn't take lightly such fraudulent behavior, which can ruin investors who make decisions based on untrue statements from corporate leaders. The S.E.C. lawsuit, essentially, says that anyone who doesn't understand this should not be a corporate leader.

Musk, I think, may have been taking his cue about acceptable conduct from the model put forth by  President Donald J. Trump. Our president makes untrue statements daily, using Twitter to disseminate his subjective version of a world that does not exist in fact.

The president, as we have all seen, seems to believe that "if I think it, I can say it's true." Is there an S.E.C.-type organization that could discipline our president, who has set such a misleading standard about what is true and what is not?

Yes. There is such an organization. It is called the United States Congress, and the mechanism for putting an end to a president's pattern and practice of making flagrantly untrue statements, which do affect others adversely, is called impeachment.

==================================================
* After reading The Times' article on Saturday morning (and after writing this post, based on that article), I heard again from The Times that afternoon, in a "Breaking News" bulletin. This "breaking news" bulletin said that Musk has made a deal with the S.E.C. after all. In other words, Musk came to his senses, or some of his advisers made him act responsibly. (Again, the parallels with the decision-making process employed by our president are striking). The S.E.C. lawsuit mentioned in this blog post will not go forward. While the facts about the lawsuit have changed since I wrote this blog post, I believe the point I make here is still worth making. We need to have a remedy for political and corporate leaders who think their subjective beliefs should be taken for the "truth," just because those leaders say so!

An article it today's Times (October 3, 2018), gives even more information on Musk's initial demand that Tesla should refuse the advantageous S.E.C. deal, and why Musk then subsequently capitulated. As finally agreed to, the advantageous settlement for Musk and Tesla is a little bit less advantageous than the first offer, though it is still a real "deal" for both both Musk personally and for the company.