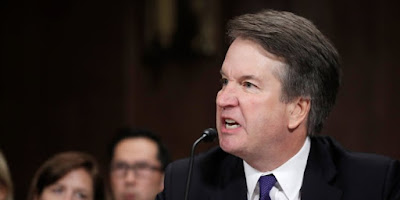 I think a great tragedy may soon be happening, right before our eyes.*

Let us assume (which I do not) that Brett Kavanaugh is being absolutely honest, and that he did not, ever, engage in an attempted rape, and did not, ever, conduct himself badly as a young person.

Let us assume (as I do not) that the challenge to his nomination to the Supreme Court, which is largely based on the testimony of Dr. Christine Blasey-Ford, is part of a hyper-partisan effort to do anything necessary to derail the ability of President Trump to make an appointment to the Supreme Court before the November elections.

Let us assume (which I don't) that Dr. Blasey-Ford is a knowing liar, who is part of the hyper-partisan scheme just mentioned, and that Judge Kavanaugh has suffered disgraceful and unfair treatment by Democratic members of the Senate, with an unfair, liberal, media helping to advance this unfair effort to derail Kavanaugh's nomination.

If all these things are assumed to be true (I don't assume them), then the opposition to the Kavanaugh appointment is a completely partisan effort to deny President Trump the ability to do what the Constitution gives him the right to do: appoint a person to serve on the Supreme Court when there is a vacancy on that body. This is how Judge Kavanaugh, the Republican Party, and those who support the Kavanaugh appointment, see things.

Let's assume that this view of reality is, actually, correct (again, I don't).

Why do I think that?

I think that because of Judge Kavanaugh's testimony before the Senate Judiciary Committee on Thursday. Facing what he believes (according to his testimony) is a blatantly partisan, untrue, and unfair attack against him, Judge Kavanaugh made all the claims just recited, and then went on to launch a personal and partisan attack against members of Congress (and the Democratic Party), striking out at those persons he claims were responsible for what he believes has been unfair treatment. By doing so, Judge Kavanaugh indicated that he is willing, if confirmed, to carry a partisan political approach to the highest court in the land.

Even if we assume (I don't) that Kavanaugh has been treated unfairly, his tirade at the Committee hearing on Thursday showed such a lack of judicial temperament that he demonstrated that he is not suited to serve on the United States Supreme Court.

The tragedy that may be unfolding before our eyes is this: the United States Constitution presumes that the Court will be an independent, third branch of government, not involved with the partisan politics that are inevitably part of the activities of both the Congress and the President. That presumption will only be valid if this is what the people of the United States believe. When we turn the Supreme Court into just another partisan institution, we have lost one of the main mechanisms that protects our representative democracy, the system of "checks and balances" that we have relied upon for 239 years.

The president is not going to withdraw the nomination (as he should). Will the Senate act for the integrity of our national system of checks and balances (as it should)?

I am still hoping, but if the Senate confirms the Kavanaugh appointment, it will be saying, boldly and baldly, "anyone who believes all that bullshit about the nonpartisan impartiality of the Supreme Court, and that the Court bases its decisions on the Constitution and the law, is really living in a dream world.  It's all partisan, all the time, and we're sticking with partisanship."

The right response to our current situation (even granting that there has been a hyperpartisan and unfair effort by Democrats to stop this nomination (something that I, personally, don't believe is true) is for the Republican Party members of the Senate to tell Judge Kavanaugh, "you know, we are terribly sorry that you were so unfairly caught up in this partisan battle, in which the Democrats are so obviously, and totally, at fault. However, it is our duty to protect our Constitutional system, and agreeing to the appointment to the Supreme Court of someone who has put himself into the partisan fight, and who has declared for one side - even though it's our side - would be a disservice to the Constitution, which we are pledged to protect and defend. We deplore the fact that you have been unfairly treated, but, as you know, politics is often unfair. Because we truly value the checks and balances that the Constitution prescribes, that means we must insulate the Supreme Court from the public perception that an appointment to the Supreme Court is just another political war prize.

"With apologies for what you have had to go through, we cannot confirm your appointment."