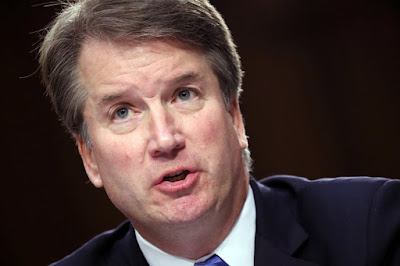 Whether or not Brett Kavanaugh (pictured above) is confirmed as a member of the United States Supreme Court (and the chances are very good that he will be), I think that Senator Ben Sasse is correct that it is Congress, not the President, whom we should ultimately blame for politicizing the Court. Sasse is a Republican, and a Member of the Senate Judiciary Committee, and his September 6, 2018, column in The Wall Street Journal, "Blame Congress for Politicizing the Court," accurately depicts how Congress has walked away from "politics," abdicating its proper Constitutional role, ceding way too much power to the president:

It’s predictable now that every Supreme Court confirmation hearing will be a politicized circus. This is because Americans have accepted a bad new theory about how the three branches of government should work—and in particular about how the judiciary operates.

In the U.S. system, the legislative branch is supposed to be the center of politics. Why isn’t it? For the past century, more legislative authority has been delegated to the executive branch every year. Both parties do it. The legislature is weak, and most people here in Congress want their jobs more than they want to do legislative work. So they punt most of the work to the next branch.

The consequence of this transfer of power is that people yearn for a place where politics can actually be done. When we don’t do a lot of big political debating here in Congress, we transfer it to the Supreme Court. And that’s why the court is increasingly a substitute political battleground. We badly need to restore the proper duties and the balance of power to our constitutional system....

How did the legislature decide to give away its power? We’ve been doing it for a long time. Over the course of the past century, especially since the 1930s and ramping up since the 1960s, the legislative branch has kicked a lot of its responsibility to alphabet-soup bureaucracies. These are the places where most actual policy-making—in a way, lawmaking—happens now.

What we mostly do around this body is not pass laws but give permission to bureaucracy X, Y or Z to make lawlike regulations. We write giant pieces of legislation that people haven’t read, filled with terms that are undefined, and we say the secretary or administrator of such-and-such shall promulgate rules that do the rest of our jobs. That’s why there are so many fights about the executive branch and the judiciary—because Congress rarely finishes its work.

Our current system, which is partisan on a national level, eliminates our ability to make politics function the way the Constitution says it is supposed to. Once elected, free from any real check in their local districts, Members of Congress try to avoid making any real decisions, just as Sasse describes.

The recent Congressional victories of Alexandria Ocasio-Cortez and Ayanna Pressley give me hope there may be a change coming. I hope so!

If we don't make our political process work the way it's supposed to, the alternatives are definitely not attractive!