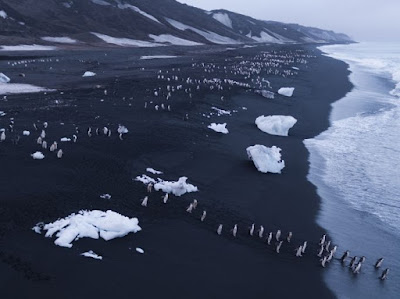 On August 1, 2018, The New York Times made available, online, a very long article and slideshow titled, "Losing Earth: The Decade We Almost Stopped Climate Change." It is a very sobering article. The article read, to me, like a note that a sailor might put into a well-sealed bottle, casting it into the ocean as his ship sank, saying a final farewell all his loved ones, and letting someone know, maybe, should anyone ever read the note, about what went on during his last hours aboard the ship.

Here are two excerpts, one from the start of the article, and one from near the end. I recommend reading the whole article.

This narrative by Nathaniel Rich is a work of history, addressing the 10-year period from 1979 to 1989: the decisive decade when humankind first came to a broad understanding of the causes and dangers of climate change. Complementing the text is a series of aerial photographs and videos, all shot over the past year by George Steinmetz. With support from the Pulitzer Center, this two-part article is based on 18 months of reporting and well over a hundred interviews. It tracks the efforts of a small group of American scientists, activists and politicians to raise the alarm and stave off catastrophe. It will come as a revelation to many readers — an agonizing revelation — to understand how thoroughly they grasped the problem and how close they came to solving it.

More carbon has been released into the atmosphere since the final day of the Noordwijk conference, Nov. 7, 1989, than in the entire history of civilization preceding it. In 1990, humankind burned more than 20 billion metric tons of carbon dioxide. By 2017, the figure had risen to 32.5 billion metric tons, a record. Despite every action taken since the Charney report — the billions of dollars invested in research, the nonbinding treaties, the investments in renewable energy — the only number that counts, the total quantity of global greenhouse gas emitted per year, has continued its inexorable rise.

Like the scientific story, the political story hasn’t changed greatly, except in its particulars. Even some of the nations that pushed hardest for climate policy have failed to honor their own commitments. When it comes to our own nation, which has failed to make any binding commitments whatsoever, the dominant narrative for the last quarter century has concerned the efforts of the fossil-fuel industries to suppress science, confuse public knowledge and bribe politicians.

It is arth: The Decade Wehuman nature, the article says, in its very final line, to hope. And hope is good. But hope is clearly not enough. "Hope" is generally founded on a prayer that somebody else will do something to save you.

One of my favorite songs, by The Byrds, is Turn, Turn, Turn. You can listen to it by clicking the video link, below. As I hear that song, and its powerful last line, "hope" is not the word that comes to mind.