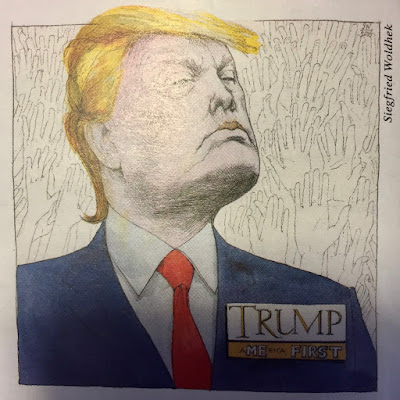 Michael Tomasky has written an excellent article about our Chief Executive. The article appeared in the August 16, 2018, edition of The New York Review of Books. Tomasky's article was titled, "Hail to the Chief." I have linked the article here, though I am afraid the link may only work for subscribers.

Tomasky does not have a very sanguine view about what is likely to happen when special counsel Robert Mueller files a report indicating that our president has obstructed justice, as Tomasky posits he will. In Tomasky's view, Republican Party members of Congress have almost totally abandoned the idea that they have a constitutional duty to "check and balance" an Executive who defies the law. They will do whatever the president wants, no matter what the president has done. That is what Tomasky thinks. Tomasky is not too sure about the Supreme Court, either! Tomasky is forecasting, in other words, a series of events that would tend to hasten the end of democratic self-government in the United States:

Since the Civil War, Democrats and Republicans have fought sometimes fiercely over their ideological goals, but they always respected the idea of limits on their power.

No one had come along to suggest that power should be unlimited. But now someone has, and we have learned something very interesting, and alarming, about these "conservatives," both the rank and file and holders of high office: their overwhelming commitment is not to democratic allocation of power, but to their ideological goals - the annihilation of liberalism, the restoration of a white ethno-nationalist hegemony.

I am not, personally, convinced that Robert Mueller is actually going to file a report accusing the president of obstruction of justice. Let us assume, however, that he does do that. Assuming he does, and that he issues a compelling report, based on solid evidence, I am not at all convinced that Members of Congress, including Republican Party Members of Congress, will then ignore their constitutional duty to do something about it.

In my opinion, no American citizen should ever "expect" Members of Congress to ignore the responsibilities that the Constitution places upon them. That said, Tomasky's description of how Republican Party Members of Congress have been conducting themselves with respect to the president is pretty much on target. Republican Party leaders have consistently let the president off the hook, excusing every excess and outrageous action or statement. Tomasky might well be correct that even a strongly compelling report from Mueller, showing that the president has obstructed justice, and broken the law, will be disregarded by Republicans.

Even if that happens, though, I do not believe that the people of the United States will let their elected representatives simply ignore evidence of significant presidential lawbreaking. This nation, whatever the Republican Party might wish, has moved far beyond the place where a "white ethno-nationalist hegemony" can or will be tolerated.

If clear and convincing evidence is produced that the president has broken the law and that he has obstructed justice, for instance by trying to hide evidence of real crimes against the nation, I think the people will demand action, and take appropriate action themselves, as necessary, in support of our  system of democratic self-government. They will do that, I think, no matter what Republican Party Members of Congress may do.

In the end, I do not think that the people of the United States will capitulate to an illegal and improper exercise of presidential power. Remember those demonstrations at the airports, after the president issued his first, and clearly unconstitutional, "Muslim ban!"

If the president has obstructed justice, that conduct must not, and I think will not be allowed to stand.