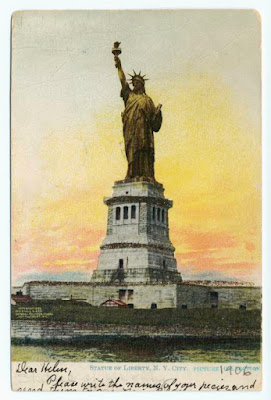 On July 4, 2018, Patricia Okoumou was arrested as she climbed the Statue of Liberty. She has pleaded "not guilty" to charges against her for trespassing, interference with government agency functions, and disorderly conduct. In commenting on her actions, Okoumou cited Michelle Obama as her inspiration: "Michelle Obama ... said when they go low, we go high. And I went as high as I could.”

Writing in Amor Mundi, the Center's weekly blog, Roger Berkowitz and Samantha Hill, the Director and Assistant Director, respectively, of the Hannah Arendt Center at Bard College, commented on Okoumou's actions, citing what Hannah Arendt had to say about civil disobedience:

In Hannah Arendt's essay "Citizenship and Civil Disobedience" she argues that civil disobedience emerges when our political institutions fail and lose their legitimacy. The nature of our political institutions requires continuing citizen participation in matters of public interest. Representative government can only retain its authority insofar as citizens have a meaningful way to engage the political institutions that give form to daily life. Arendt argues that representative government itself is in crisis today because all institutions that permitted citizen participation have been eroded by "bureaucratization and the two parties' tendency to represent nobody except the party machines." Civil disobedience emerges amongst the people "when established institutions of a country fail to function properly and its authority loses its power."

I can't imagine that there is much disagreement about a claim that "representative government is in crisis today." I also think that most would agree that our government has been degraded by "bureaucratization and the two parties' tendency to represent nobody except the party machines."

It is one thing to understand this. It is another thing to change the conditions that have undermined democratic and representative self-government. Acts of individual civil disobedience can dramatize our dilemma. Organized civil disobedience, which is something other than protest marches in the streets, is going to be needed, if we are to restructure the realities that we can all so plainly see have brought our nation to the danger point.

We are all going to need to go quite a bit higher!