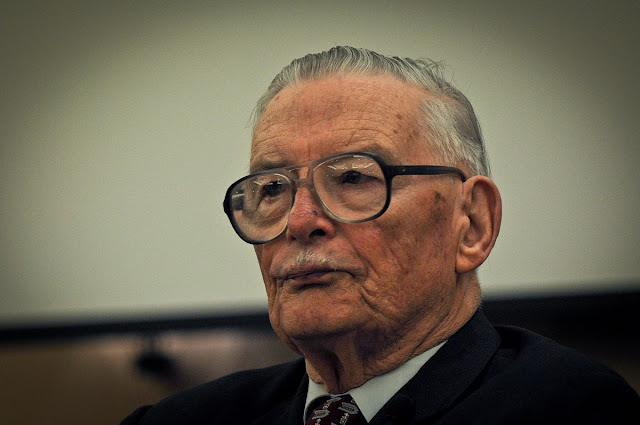 The sourpuss pictured above is Nobel laureate James Buchanan. According to Nancy MacLean, the William H. Chafe Professor of History and Public Policy at Duke University, Buchanan is the intellectual linchpin of a Koch-funded, and rather successful, attack on democratic institutions. This attack is ongoing, and is having great success.

If you would like to know more about what Buchanan proposes, you can read Buchanan's books, listed in Wikipedia. Better, you can read MacLean's latest book, Democracy in Chains. MacLean has subtitled her book, "The Deep History of the Radical Right's Stealth Plan For America." The Koch Brothers (and Buchanan) are right at the center of this ongoing attack, and MacLean outlines how this attack is being so successfully advanced.

Finally, and most expeditiously, you can read an excellent article by Lynn Parramore, a Senior Research Analyst at the Institute for New Economic Thinking. Parramore's article is a review of Democracy in Chains, and should help convince you, if convincing were needed, that "theory" and "practice" are definitely related in the real world of politics. "Public choice theory," the economic theory advanced by Buchanan, has inspired real world political actions that have been undeniably successful in undermining democracy in the United States.

Seriously, I recommend that you click the following link, and read Parramore's review of Democracy in Chains. Those who continue to think that democracy is a pretty good idea need to know what they're up against!

With Koch’s money and enthusiasm, Buchanan’s academic school evolved into something much bigger. By the 1990s, Koch realized that Buchanan’s ideas — transmitted through stealth and deliberate deception, as MacLean amply documents — could help take government down through incremental assaults that the media would hardly notice. The tycoon knew that the project was extremely radical, even a “revolution” in governance, but he talked like a conservative to make his plans sound more palatable.

MacLean details how partnered with Koch, Buchanan’s outpost at George Mason University was able to connect libertarian economists with right-wing political actors and supporters of corporations like Shell Oil, Exxon, Ford, IBM, Chase Manhattan Bank, and General Motors. Together they could push economic ideas to public through media, promote new curricula for economics education, and court politicians in nearby Washington, D.C.

At the 1997 fiftieth anniversary of the Mont Pelerin Society, MacLean recounts that Buchanan and his associate Henry Manne, a founding theorist of libertarian economic approaches to law, focused on such affronts to capitalists as environmentalism and public health and welfare, expressing eagerness to dismantle Social Security, Medicaid, and Medicare as well as kill public education because it tended to foster community values. Feminism had to go, too: the scholars considered it a socialist project.

Democracy, of course, has a "theory," too. It's outlined in the Constitution, which proposes a very specific system to ensure that our government will be "of, by, and for the people." Theory alone, though, is never enough. The Koch Brothers understand that, and have put their significant fortunes to work implementing "public choice theory."

If we want to implement "democratic theory," and want to save democratic self-government, then we need to turn the theories outlined in our Constitution into practical, political action. It's a matter, as a group of fifty-six patriots said, right at the outset, of "our lives, our fortunes, and our sacred honor."

To preserve "self-government," and to put democratic theory into practice, we will need to put our lives on the line. We need to get involved in politics and government ourselves.