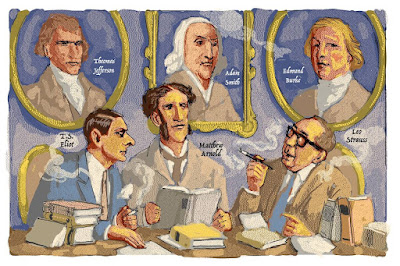 I have never much liked those commonly-applied labels, "liberal" and "conservative." When I was a practicing politician, "progressive" was the label I mostly used, to try to make sure that no one ever put me in either one of those "liberal" or "conservative" camps. Some of my political friends were self-identified as "socialist-feminists." I liked their politics a lot!

A book review published in the June 18, 2018, edition of The Wall Street Journal is pretty confusing, at least to me, as it tries to distinguish between the traditional "liberal" and "conservative" labels. The book reviewed is titled, Conservatism: An Invitation To The Great Tradition, by Roger Scruton.

Now, "Toryism" is most certainly not where I am, politically. The Tories were the folks who supported Britain during our Revolutionary War, and I celebrate the fact that they were soundly defeated! Hey, we can all celebrate that tomorrow!

On the other hand, "hyper-individualism" (posited as the opposite of "conservatism") is exactly what is wrong with our politics, society, and economy today. That is my opinion, at least. I am for the "we," not the "me." If "individualism" is the test of who is a "liberal," I would seem to be somewhere towards the "conservative" side of the spectrum.

Richard Aldous, the person who has revieewed Scruton's book for The Journal, also seems a bit discombobulated as he discusses and contrasts the "liberal" versus the "conservative" philosophy. He ends up here:

It would be a gloomy picture were it not for the glimmer of hope that Mr. Scruton offers. That chink comes through the American “genius for civil association”—something Tocqueville first noticed in the early 19th century.


Small groups of ordinary women and men made the American Revolution. You can read all about it in On Revolution, by Hannah Arendt. In fact, I hope you will.

You can read the review of Scruton's book in just a few minutes. On Revolution will take you longer. Don't worry; it's worth it.

Setting a new revolution in motion is going to take some time, too! I'd suggest we leave the labels behind and start working on it.