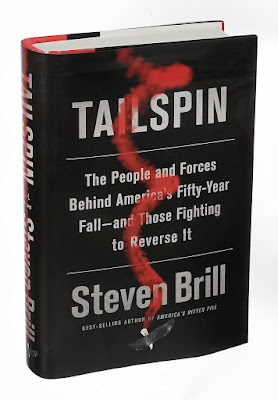 I have never been ashamed to comment on a book I haven't read. Not as long as I can rely on a good review, at least!

In this case, I found out about Steven Brill's newest book, Tailspin, by reading a review by Jennifer Szalai published in The New York Times on June 7th. In the hard copy edition, Szalai's review was titled, "Woe America, The Polarized." If you click this link, you can read the online version of her review. You can also read the entire book, of course. Seems like that might be a good idea!

According to Szalai, Brill's book "bemoans a polarized America," and his "exasperation" is "not the fury of the stymied leftist but the frustration of the disappointed centrist."

Brill's is an exasperation I share, even though I'd ally myself more with the "leftist" group than with the "centrist" party. People of all political persuasions have a very good reason to be exasperated by the current state of our political life.

My main comment about Brill's thesis goes back to Szalai's initial introduction, telling us how Brill came to write his book:

Brill says the idea for his book came before the November 2016 election, when he landed at a “grimy terminal” at Kennedy Airport and got stuck in traffic on the “dirty, pothole-filled” Van Wyck Expressway. The bumpy road jolted him into thinking about everything from politics “to economic opportunity to health care to simple civility.” “How had things deteriorated so badly?” he wondered. He spent the next two years combing the country to find out.

Not to denigrate Brill's argument that political "polarization" has brought America into a bad time, the deterioration of America's infrastructure should be given a bigger role, as we consider what has led to our "exasperation," and to our political malaise and dysfunction.

It is the sophisticated citizen who can see our woes as the result of ignoring the phenomenon of "opportunity cost," but that's where I suggest we look. Even when the nation is willing to run itself on debt (as it seems to be willing to do), it remains true that there is a limited amount of money to be spent. If we spend our money one way, we lose the opportunity to spend it some other way.

Our nation's leaders have chosen to spend a huge fraction of the wealth generated by our economy on the military. On killing people. On destroying cities and countrysides around the world.

Not only has this choice plunged the entire world into a refugee crisis, it has led to those deteriorating conditions on the Van Wyck Expressway (not to mention the deteriorating conditions found everywhere in our contemporary United States). Our commitment to military spending has led to less money for education and health care. We're spending our money on bombs and drones, and we are exhausting our wealth on destructive, not constructive projects.

Is there a simple way to break free from the paralyzing malaise that is exasperating so many?

I suggest there is: let's stop throwing away our money on military adventurism, sophisticated new weapons of death, and efforts to bomb other peoples into submission to our will.

Let's try that for awhile. My prediction is that the nation will become a lot less "exasperated."