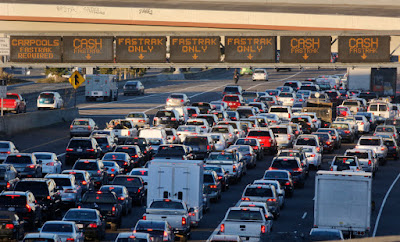 On Tuesday, May 22, 2018, the Mercury News ran a front-page article on the $3 toll hike proposed in all nine Bay Area counties; Bay Area voters will be deciding this June. The headline on the article, in the hard copy edition of the paper, reads as follows: "Traffic or higher tolls? You make the choice." Here is the first line of the article:

Voters in all nine Bay Area counties next month will face a difficult choice: endure bridge tolls reaching as high as $9 by 2025 or continue to suffer through seemingly constant traffic gridlock with few viable alternatives.

The article and its headline suggest that raising tolls will eliminate or significantly reduce the "seemingly constant traffic gridlock" that we all know so well. It's a simple choice; one thing or the other. You decide! To use a phrase often encountered in the courtroom, this conclusion "assumes a fact not in evidence."

There is no solid evidence that spending more money on road widening and related efforts will actually reduce traffic congestion. In fact, there is a lot of evidence that such new expenditures actually increase traffic congestion because of "induced demand." The article notes that transit advocacy groups, like TRANSDEF, oppose the toll hike, and that the voters and commuters quoted in the article are wary of the claims that the proposed toll increases will reduce congestion. Read the article to understand the debate.

Read a related article to consider another important issue. The headline on that related article is this: "Who backs $3 toll hike? You might be surprised." The key issue raised in this article, though not explicitly, is "who pays?" If it does make sense to spend lots of money to decrease traffic congestion (and there is no proof that the expenditures planned will achieve that result), it is obviously important to decide who should pay for the proposed improvements. The current proposal is that commuters should pay, through a toll increase. As it turns out, the big backers of the proposed toll increase are the major Silicon Valley corporations whose workers are the ones stuck in the traffic.

In other words, large corporate employers, like Facebook, Google, and Salesforce.com want drivers to pay for the traffic improvements that will result from the toll hike.

Why not the companies?

We know why not. The proposal that ordinary drivers should pay for the improvements will let the giant corporations off the hook, and our political system, from the local level to the national level, is structured to make sure that these corporations never have to pay their fair share.

I suggest that a fundamental breakdown in our politics is evident in the toll hike proposal. Should you vote for it? As the Mercury says, "you make the choice."