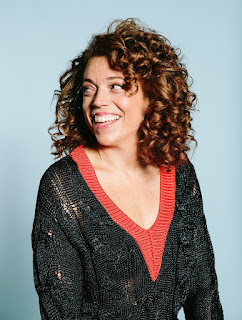 Pictured to the right is Michelle Wolf, a comic who just distinguished herself by speaking at the White House Correspondents' Dinner. She pretty much attacked all those members of the Trump Administration who still have jobs, and who haven't been fired yet. That was one of her jokes, by the way. There aren't that many left.

Click this link to watch some video of Wolf's performance.

The New York Times did quite an extensive story on Wolf, prior to the dinner. It was very upbeat.

After the dinner, the Times' story focused on the furor that Wolf set off with her remarks. Her jokes at the expense of Sarah Huckabee Sanders, the White House press secretary, were particularly deplored.

Of course, I wasn't there, but it's probably appropriate to note that attacks focusing on persons and personalities are certain to be more problematic than attacks on policy. On the other hand, public public figures, who sometimes deserve having their actions deplored, need to realize that they are "fair game" for obnoxious attacks.

That's what you get if you're a public figure. You can take it from the United States Supreme Court!