#86 / Politics Is Only Partly About Personality 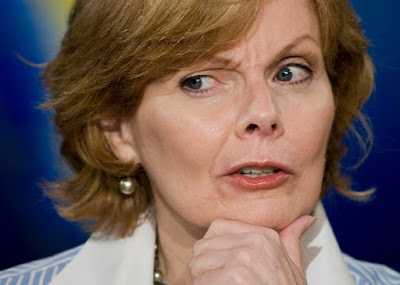 Pictured is Peggy Noonan. As Wikipedia describes her, Noonan "was a primary speech writer and Special Assistant to President Ronald Reagan and has maintained a conservative leaning in her writings since leaving the Reagan administration." Noonan's column, titled "Declarations," appears regularly in The Wall Street Journal. Though I am no fan of Noonan's politics, I can sometimes be smitten by her rather reasonable way of talking about contemporary political issues.

In the Journal's March 10-11, 2018, issue, for instance, Noonan talks about our current president. This is her headline: "Over Trump, We're as Divided as Ever."

Noonan is speaking for, and to, people whom she calls political "centrists and moderates." She notes why such persons are attracted to Trump, despite all his unattractive features. This is her topic in the column I am referencing:


If you are that person [a centrist or a moderate], when you look at the policy impact of President Trump’s first year, you see some good and heartening things.

He has established in his government a deregulatory spirit that is fair and helpful. Regulation, you know, is good—we’re all human; business leaders will make decisions that are good for the company or shareholders or themselves, but not necessarily good for the town, state, country. So regulation has an important role: It helps you be a good citizen and gives cover to you when you are one. But excessive regulation, especially when it springs from ideological animus or practical ignorance, kills progress, growth, jobs, good ideas and products.

Mr. Trump has put a sober conservative on the Supreme Court, and many conservative judges on the lower courts. This provides greater balance in the judiciary. In a split country, split courts—balance—is probably the best we can do.

The economy is improving. And Mr. Trump helped pass a tax bill that was better—maybe a little, maybe a lot, but certainly better—than what it replaced.

Not bad for a first year in office!

So you, moderate, centrist professional, should feel high enthusiasm for Donald Trump. And yet you don’t, not really. What you feel is disquiet, and you know what it’s about: the worrying nature of Mr. Trump himself. You look at his White House and see what appears to be epic instability, mismanagement and confusion. You see his resentments and unpredictability. You used to think he’s surrounded by solid sophisticates, but they’re leaving. He’s unserious— Vladimir Putin says his missiles can get around any U.S. defense, and Mr. Trump is tweeting about Alec Baldwin. He careens around—he has big congressional meetings that are like talk shows where he’s the host, and he says things that are both soft and tough and you think Hmmm, maybe that’s a way through, but the next day it turns out it was only talk. This has been done on the Dreamers, on guns and we’ll see about tariffs. He loves chaos—he brags about this—but it isn’t strategic chaos in pursuit of ends, it’s purposeless disorder for the fun of it. We are not talking about being colorfully, craftily unpredictable, as political masters like FDR and Reagan sometimes were, but something more unfortunate, an unhinged or not-fully-hinged quality that feels like a screwball tragedy.


The bottom line for Noonan is that "Crazy doesn't go the distance." In other words, Noonan is warning her centrist and moderate readers, with whom she identifies on matters of policy, that there is a fundamental problem with our president, and it has to do with his personality and personal conduct.

Though I don't share Noonan's centrist and moderate policy preferences (the very things she cites as the Trump positives for the centrists and moderates seem to me to be taking our nation in the wrong direction), I do, nonetheless, appreciate the reasonable tone of voice with which she usually makes her "declarations." In this case, I certainly agree with Noonan that President Trump is "crazy," and that "Crazy is an unstable element that, when let loose in an unstable environment, explodes."

Having read and appreciated Noonan's column, I would like to make a point to the "progressives and liberals" with whom I identify politically.

"Policy" counts, too. Those who want to win seats in Congress for more progressive and liberal candidates, and to elect a different president next time, have to campaign on more than the fact that our current president is "crazy," and that his personality and personal conduct demonstrate that he is unworthy to represent this nation.

While that evaluation of our president's personality and personal conduct is certainly accurate (and I appreciate Noonan making the point), politics is only partly "personal." Politics is also about "policy," and those on the progressive and liberal side of the spectrum had better campaign on the basis of some policy programs that can appeal to the centrists and the moderates.

A campaign focused on how "crazy" and unworthy our current president is is not, I think, going to carry the day. As Noonan's column reveals, there is much on the policy side that the centrists and moderates applaud.

So, this blog posting is just another reminder, stimulated by a reading of Noonan's column, that our politics on the progressive side must be "propositional," not simply "oppositional." If we want to change the policies that are now undermining the progressive social, economic, and political gains that our nation has made since the time of President Franklin D. Roosevelt, we need to do more than campaign against Donald J. Trump.