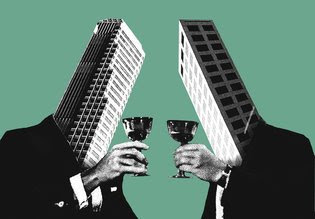 Zephyr Teachout, an academic, an activist, and a former candidate for Governor of New York, has written a nice review in The New York Review of Books. The book that Teachout has reviewed is called, We The Corporations: How American Businesses Won Their Civil Rights.

Most of us know about Citizens United. This is the United States Supreme Court case that made clear that corporate "civil rights" includes the right to spend unlimited amounts of money on American politics. Money is just the same as "speech," according to the Supreme Court, and we all know that "free speech" is fundamental to American democracy.

Some have observed a flaw in the system, as now structured under Citizens United. While we may all be free to speak out, individuals and corporations alike, it actually costs a lot of money to distribute a message to the American public. This is no problem if you have billions of dollars, like the Koch Brothers, and like many corporations. If you have the money, you can really say a lot! If you don't have billions of dollars, it turns out that "free speech" isn't actually "free." Without the bucks to be able to distribute your message you are strictly out of luck.

Since I am basing this blog posting on a one-page book review, and not on the book itself, I am not exactly certain how We The Corporations addresses this issue. Teachout doesn't highlight it. What did strike me in Teachout's review, though, is her accurate observation that corporations are "persons," too. If they are, and that is pretty undeniable, given the current state of the law, then corporations can be regulated in the same way other persons are. It's not easy, but it's not impossible, to impose dramatic public regulations over the operations of all American corporations. As Teachout puts it:


We need neither abolish corporations nor accept them as they are; we can instead fight for new laws and for new Supreme Court justices. If we don’t like how corporations have appropriated civil rights in the name of citizens, we can change that.