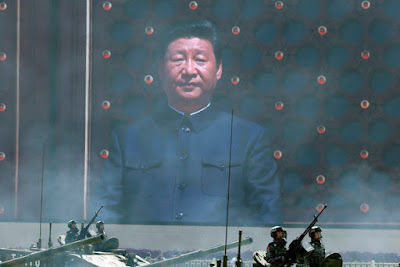 This poem is by an anonymous Chinese author, and has been translated and published by Geremie R. Barmé, who is a professor of Chinese history and the founding director of the Australian Center on China in the World at the Australian National University. Barmé is also the editor of China Heritage.

This poem, "I Object," has circulated on social media and among China analysts, and the last few lines of the poem were published in an article in the March 10, 2018, edition of The New York Times, "Murmurings of Dissent Upset China’s Script for Xi’s Power Grab."

Reporters Steven Lee Myers and Javier C. Hernández, both with extensive experience in China, identify this poem (and other poems that have been suppressed in China) as evidence of the "murmurings" that signify that the efforts of Chinese President Xi Jinping to establish what amounts to his lifetime rule over China have only a "veneer of public support."

As I noted in one of my recent blog postings, autocracy, which gives the appearance of strength, is ultimately weaker than a political system that recognizes the ultimate truth of our human condition: we are all together in this life, and we best address every issue, from pollution to sexual harassment, when we are all engaged in the debate and discussion that will ultimately lead to action.

The "objections" in the poem are not specifically Chinese objections. "Roads that smother flowers and trees," and "crap songs," afflict us all.