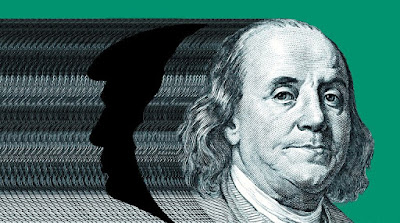 Our president may be a shameless bully with bad morals, but let's give some credit where credit is due. That is the pitch that Stephen Moore makes in his January 29, 2018, column in The New York Times. Moore, a senior fellow at the (right-wing, pro-business) Heritage Foundation, asks whether "the economy could be any rosier?" His answer is, "No," and he thinks it would be fair to give credit to President Trump.

I have a slightly different take on this question. Assuming, for argument's sake, that the economy could not, in fact, be "any rosier" (and "rosier" for whom would be a basic quibble), I don't think the president deserves the credit.

In fact, there is a political phenomenon that I have always thought of as a "capital strike," which occurs when corporations and individuals with massive amounts of money (the "billionaire class") decide that they are not going to spend the money, no matter what, because they don't like the people who won the last election. As is evident from the way the Republicans in Congress treated President Obama, on virtually every policy issue, the plutocracy knows how to play this game.

What happened after the Trump victory in the 2016 election? Those with money decided that they now had "confidence," confidence that environmental regulations would be eliminated, tax rates would be lowered, and our military-based businesses would flourish. Thus, these wealthy interests put their capital in play, and voila!

I think it would be wise to recognize that this phenomenon has been going on for a long time. I cite you to President Theodore Roosevelt's 1907 indictment of the "malefactors of great wealth" whose good works concealed their greed and rapacious disregard for the public:

Too much cannot be said against the men of wealth who sacrifice everything to getting wealth. There is not in the world a more ignoble character than the mere money-getting American, insensible to every duty, regardless of every principle, bent only on amassing a fortune, and putting his fortune only to the basest uses —whether these uses be to speculate in stocks and wreck railroads himself, or to allow his son to lead a life of foolish and expensive idleness and gross debauchery, or to purchase some scoundrel of high social position, foreign or native, for his daughter. Such a man is only the more dangerous if he occasionally does some deed like founding a college or endowing a church, which makes those good people who are also foolish forget his real iniquity. These men are equally careless of the working men, whom they oppress, and of the State, whose existence they imperil. There are not very many of them, but there is a very great number of men who approach more or less closely to the type, and, just in so far as they do so approach, they are curses to the country.

That other President Roosevelt, Franklin, also spotlighted the problem in 1936, in a speech in which he noted, accurately, that :

We had to struggle with the old enemies of peace—business and financial monopoly, speculation, reckless banking, class antagonism, sectionalism, war profiteering.

It is possible to have a prosperous economy, and one that pays attention to the people and the public interest, and not just to the billionaires, but let's not make any mistake. Enduring prosperity depends on the people mastering the malefactors. Let's not give them credit for loosening their grip a bit, as they celebrate a regime that will sell out the ordinary people to make them even richer than they already are.