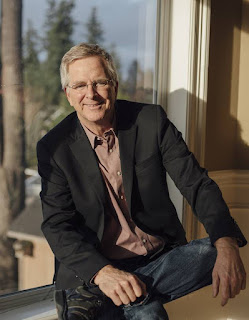 Pictured is Rick Steves, the travel writer. A recent article in The Wall Street Journal made me aware that Steves has written a book called, Travel As A Political Act.

Steves also gives "travel classes," including a class with the same title as his book. You can take in an hour-long presentation on the topic by activating the video that is linked below.

As anyone who reads this blog on a regular basis knows, I am not at all abashed at the thought of commenting on a book I haven't read. And I haven't read Steves' book. I do think I understand the gist of his argument, though, since I have now browsed the book using the "preview" function available on the Internet, and I have also read the article about Steves in The Wall Street Journal.

Steves says that Americans will understand the world better if they have traveled. He says that travelers will get new ideas, and appreciate different cultures and political arrangements. Travel, Steves asserts, will help cure the disease of ethnocentrism. Travel is a force for peace.

I think all of this is right.

There is a problem, however. Travel costs money, and not everyone can gain the "political" and other benefits that travel provides. I have been able to travel quite a bit, during my life, and count myself very fortunate to have been able to do that. My parents took me to Mexico when I was twelve years old. We went to Canada when I was, probably, fourteen years old. Once I went to college, I spent six months in the Stanford-in-France program, and traveled in North Africa during our holiday break in 1962-1963. I did more travel around Germany and France when the Quarter ended.

I have spent a month learning Spanish in Salamanca. I went back to Mexico for a month for the same purpose. I spent a month in Buenos Aires, too, learning more Spanish. I went to Taiwan, Japan, Hong Kong and Macau as part of the superlative Volunteers in Asia (VIA) program. I won a free trip to Fiji, and so my wife and I added on a visit to New Zealand and Australia, since we were in the neighborhood. Because of an article my wife picked up at the dentist's office, we embarked on an around the world tour, and visited Egypt, and many destinations in Asia and South America; plus, we have been to Spain, Italy, Greece, Germany, Austria, Switzerland, Sweden and Denmark. We have been to Ireland, Scotland, and to England on repeated occasions. We also get to visit my sister Nancy, and her husband Rick, every year or so, at their wonderful bed and breakfast (called Maison Conti) in Montmirail, France. Click the link to check it out. Naturally, we take in Paris on the way.

I am not listing every place to which I have traveled, and I now realize I didn't even mention my one trip as a merchant mariner. That trip took me through the Great Lakes, then down the Atlantic Coast and through the Panama Canal to stops in Asia, including a stop in Vietnam during the war. But you get the idea. I have been extremely fortunate to have seen a lot of the world, and maybe there's an Africa visit out there, too, sometime in the future. Not to mention Iceland, or maybe even India; or mainland China.

Let me return to the observation that we have "a problem," when we talk about the political and other benefits of foreign travel. Very few people will be as lucky as I have been to travel so extensively, or at all. Most Americans are not going to be able to undertake the kind of travel that Steves advises, so most Americans will not get the "political" benefits that he discusses. This really IS a problem!

We are, as most of us realize (whether we have traveled extensively or not), living in ONE world. We are "all in this together," globally. We need to make sure that we all understand what living in one world actually means. This means that every American should be able to benefit from the kind of experiences that Rick Steves talks about. It is also true, I think, that Americans would be a lot better off if people from all over the world were able to travel here, and spend some time in our country.

I don't, actually, think it is too far-fetched to think that the future of the human race may well depend on our ability to understand the kind of lessons that travel teaches.

So, here is my proposed solution.

I believe the United States government should initiate a program that would provide an opportunity to travel to some other place in the world, for any American who wished to avail him or herself of this opportunity. I would say that the program should focus, at least initially, on young people of high school age. The travel opportunity should be "free," and the program should be "balanced." Arrangements would be made so that for every American who went to India, for example, an Indian would come here. I envision a program that would be based on a six-month placement in a specific foreign location, with perhaps a stipend for another month for free travel for participants at the end. The scale of the program should, ultimately, be massive, with at least one million Americans abroad at any one time, and with at least one million foreign visitors here.

We might want to reinvest in the State Department, and have it play a key role in making arrangements. The more potentially "hostile" countries involved in this kind of trade the better. No United States president would likely want to launch a bombing attack on North Korea, or Syria, or Iran, say, if there were ten or twenty-thousand Americans in the places where the bombs would fall. And vice versa, of course.

Considering that this program would do a lot more for world peace than military invasions, and would cost less, I think the budget could finance it.

We need to get those "political" benefits of travel that Rick Steves promotes, so let's make sure that every American (and many people from other countries) will actually have that experience. We do "live in a political world," and that means that a decision to inaugurate such a new program is a "political" choice.

As I say, I don't think it's a stretch to think that the ultimate fate of humanity may be tied to just how quickly we can truly understand that we live, together, in one world, and then go from that insight to the establishment of practical arrangements to make sure that we take care of each other, instead of killing each other.