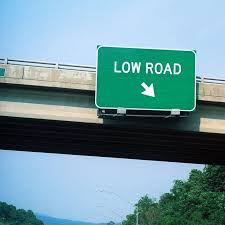 Yesterday, I suggested that it might be good to study "Trump As A Technique." I will stick by that recommendation, but part of the president's "technique" seems to rely on an effort to take the truth out of politics. That is not a "technique" that we can long tolerate, if we want to preserve any chance that we can establish and maintain a government "of, by, and for the people," a phrase that captures what has always been our highest aspiration as a nation (if never our actual accomplishment).

The president's statements about "tax reform" provide a good example of the phenomenon. As The Washington Post reports: "The GOP tax plan on the cusp of becoming law diverges wildly from the promises President Trump and top advisers said they would deliver for the middle class — an evolution that shows how traditional Republican orthodoxy swamped Trump’s distinctive brand of economic populism as it moved through Washington."

Pictured below is the President trumpeting the idea that once his "tax reform" proposals are enacted it will be possible to file one's tax return on a nice, red, white and blue postcard. That was back in November. No mention of that promise now! 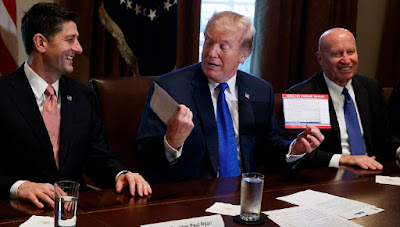 The New York Times ran a profile of the president in its Sunday, December 10, 2017, edition. The article actually said a few nice things about the president, but it didn't try to excuse his continued inability to remember his promises (if only to acknowledge a change of mind or a change in course).

As we struggle to find our own techniques for operating in today's political world, I'd say that the "high road" will necessarily require that we say, always, what we think is true, and that we always state, truthfully, what we intend to do.

A technique of political persuasion that is premised on those two principles will bring our politics back from the political wilderness in which we find ourselves now. We're going to have to make a sharp left turn! 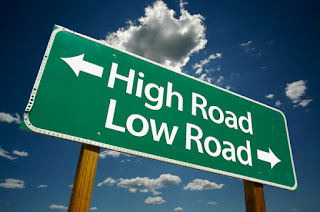