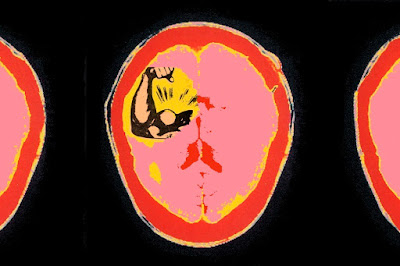 If a recent article in The Atlantic is right, "Power Causes Brain Damage." Jerry Useem is a writer who covers business and economics for The New York Times, Fortune, and other publications. He is a Contributing Editor at The Atlantic.

Useem's article in the July/August 2017 issue of The Atlantic reports on years of lab and field experiments by Dacher Keltner, a psychology professor at UC Berkeley. Useem sums up Keltner's findings this way:

Subjects under the influence of power, [Keltner] found in studies spanning two decades, acted as if they had suffered a traumatic brain injury—becoming more impulsive, less risk-aware, and, crucially, less adept at seeing things from other people’s point of view.

These findings about the impact of the possession of power on the brain not only explain the behavior or our current president, but also suggest that "democracy," a political system in which power is widely disseminated, not concentrated, is a prescription for social and political good health.

Let's not forget, as I always like to remind myself (and others), genuine democracy and self-government require that we get involved in politics ourselves. Ceding political power to the "leaders" who are so willing to accept its benefits (and burdens) will result in a system of government that reflects (as we now understand it) an organic psychopathology!