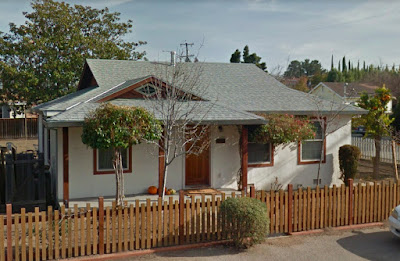 Pictured above is a nice little house in Cupertino. It just sold for $2 million. The new owner intends to tear it down. You can read the story right here.

In Santa Cruz County, there is a lot of discussion about "affordable housing,"  but there is a real problem with that label. When you think about it, all housing is "affordable." The question is simply who can afford it!

The house pictured above, if located in Santa Cruz County, would probably sell for less than $2 million, but it wouldn't sell for that much less. I am thinking that the $2 million house in Cupertino would probably bring something like $1.35 million here. Maybe a little bit less. Maybe even a little bit more, depending on location. That house certainly wouldn't be "affordable" to a family with an average or below average income, here in Santa Cruz County, but it would be "affordable" to a person who could  pay $1.35 million for a 79-year-old, 1,015-square-foot home, then pay to tear that home down, and then pay to put up a modern monster home, which is undoubtedly the fate of the property that has recently traded hands in Cupertino.

Here's the point: as long as prices are set by "the market," those with the most money will outbid those with less money and drive the prices up. The properties sold will only be affordable to the wealthy, and there happen to be an awful lot of those folks around. California coastal real estate commands top dollar in the global marketplace, and Santa Cruz finds itself right next door to the Silicon Valley, where high-tech workers have much more money than those who live and work right here.

Moreover, when the City or the County puts zoning on a home like the one pictured above that tells property owners that they can build a much larger, high-rise and high-density structure on their property, that zoning designation drives the price of the property even higher. That translates to the government inviting someone who has the money to do so to tear down perfectly acceptable existing housing, to create something that will be out of the price range of the people who are displaced when the existing housing is torn down.

The only way to make new housing "affordable" to persons who have an average or below average income is to put a price restriction on the new housing produced. Otherwise, the "market" will always respond according to that Golden Rule we know about. Those with the gold make the rules, and they get the goods.

The "law of supply and demand" suggests that producing more housing should bring down the price. In Santa Cruz, it won't bring it down enough to enable local folks to "afford" the new housing produced.

Let's take a tip from this recent experience in Cupertino, and stop pricing ourselves out of our own community by upzoning properties to let developers tear down existing structures, and then build high-rise and high-density buildings in all our nicest neighborhoods!