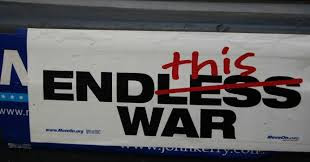 If you are not familiar with the acronym AUMF, now would be a good time to get educated. A recent story in The Washington Post gives a current update. You could also consult some of my earlier blog postings:

In short, the Authorization for the Use of Military Force (AUMF) gives the President of the United States an almost totally unconstrained ability to imprison (and kill) just about anyone that the President "determines" is involved in the so-called "War on Terror" that has so preoccupied the United States since September 11, 2001.

In September, an American citizen captured in Syria while fighting for ISIS (John Doe) was handed over to the U.S. military. He is now being held in Iraq.

That’s a problem. In 2004, the Supreme Court ruled that the AUMF allowed American citizens to be detained and held as “enemy combatants” outside the civilian court system. But such detainees had to receive some measure of due process, including “a meaningful opportunity to contest the factual basis for that detention before a neutral decisionmaker.”

All this raises issues for how the administration can deal with John Doe. The first option is to charge him in a civilian court — but doing so would require assembling admissible evidence that can convict him, which could be difficult. A second is to transfer him to Iraqi custody — but doing so risks violating a law against sending prisoners to countries that practice torture ...

For the past two months or so, the government has punted on the question by simply holding John Doe incommunicado. The ACLU has filed a lawsuit on his behalf, though it is not clear whether the organization has standing to bring this challenge. But at some point — surely soon? — the administration will have to make a choice.

The administration has suggested that perhaps Congress could craft an updated AUMF. But the administration has conditions — namely, that the AUMF have no conditions ... Tillerson and Mattis told the Senate that, “any new AUMF would need to be free of time constraints, geographical constraints or operational limitations; instead they proposed a conditions-based approach that would end the authorization only once certain targets are met. (These targets were not specified.)”

Will Congress write that almost-blank check? Will the courts force their hand? Stay tuned.

If you think that the President of the United States should have an unreviewable ability to imprison anyone the president determines is participating in, or is "supporting" participants in, the so-called "War on Terror," then you'll be pleased that President Trump wants an unconstrained ability to do just that.

If you don't think that's a good idea, then call your Senators, and your Member of Congress, and let your elected representatives know that it's time to terminate the AUMF.

Is there any question in your mind about this? Just remember, President Trump wants to make the president's "determination" unreviewable, so no actual "evidence" will be necessary indefinitely to imprison those he designates.

John Doe, in other words, just might turn out to be you!