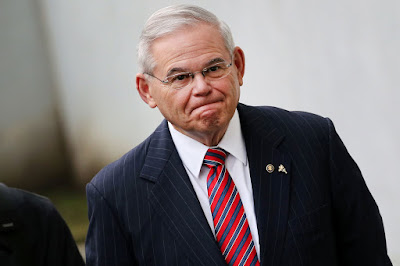 The man you see above, Robert Menendez, is a United States Senator representing New Jersey.  He is a member of the Democratic Party. Menendez was accused of bribery and political corruption, but the jury hearing his case could not agree on a verdict. Therefore, he was not convicted, and he has announced for reelection.

The New York Times ran a news story on the Menendez case in its November 17th edition, under the headline, "Why Are Corruption Cases Crumbling?"

The Menendez case is only the most recent example of political corruption prosecutions that have failed to result in a conviction of the accused politician. Read The Times' article if you would like to see the scorecard, and understand the legal rules involved.

In short, the courts say that it is only "corruption" if a politician receives money in a direct quid pro quo exchange for taking an "official act" in favor of the contributor. Smart politicians don't do that. Members of the public, however, might well call them "corrupt," because their overall activity is dictated by the big money contributors who make their life good, and whose contributions help keep them in office, and whose interests are advanced to the detriment of the public at large.

In my blog posting, "Mr. Collins Makes It All Quite Clear," I outline how the system works. "Donors," not "voters," get represented.

This is not, of course, the way it is supposed to work; not in a democracy, at least. But let's be clear; unless voters are quite engaged, and pay attention, and get organized, and demand that their elected officials actually represent them (and throw those politicians out of office if they don't), then many politicians will keep taking actions that don't count as official "corruption," but that in fact benefit the special interests not the general public.

It's not a party thing, either. Collins is a Republican. Menendez is a Democrat, and a November 26th article from AlterNet focuses specifically on the Democrats, as it talks about this phenomenon in connection with a so-called "tax reform" bill, now being advanced in Congress. This is a bill that would benefit the extremely rich, at the expense of everyone else, and if the bill passes (as seems quite possible), Democrats, as well as Republicans, will have been implicated in this failure to represent the public interest.

"Politics" is how we make the collective decisions that ultimately determine the shape of the human world that we most immediately inhabit. No outside agency can save us from the political responsibilities that come with citizenship. And as we are seeing, the courts won't do it, either.

I think it has to be up to us.

We won't achieve self-government unless we get involved ourselves.