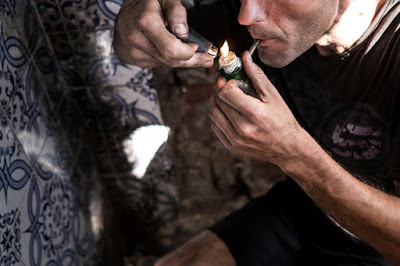 If there is merit in the critique implied in my blog posting from yesterday (nothing really new is being proposed, culturally or politically), then let's consider a couple of recent ideas gleaned from The New York Times.

Two articles that appeared in the Sunday, September 24, 2017, edition address important political issues, and suggest that there could be some different approaches to a couple of current political "realities."

First, accompanied by a jumbo rendition of the image above, Nicholas Kristof tells us how we can win the "war on drugs." Follow Portugal's example, he suggests, and "treat addiction as a disease, not a crime." That could work! It couldn't be worse than our current approach, that's for sure!

And what about "war" itself? As our "dotard" president crosses threats with the maniac "Supreme Leader" of North Korea, it might be a good time to start looking for some alternatives. Louis Uchitelle convincingly documents that the United States economy "Still Leans on the Military-Industrial Complex." What if we built a jobs-oriented political movement to shift our economy from its current, military foundations to an economy based on peace? That would definitely be a new idea, culturally and politically.

Think there is any hope for new approaches? I didn't spend the last two years of my undergraduate career studying "Utopia" for nothing.

The "communes" may have largely disappeared, but I think we've still got a chance for some "utopian" approaches to the challenges we face today.

Couldn't be any worse than our current approach. That's my view. Let's give utopia another chance.