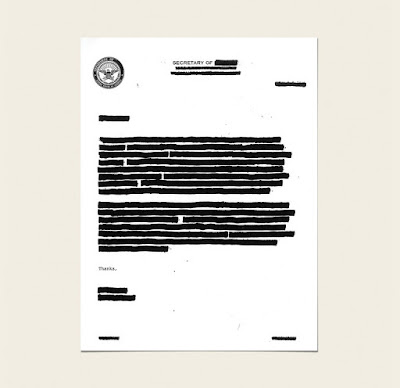 The image above is a little hard to read (the part that is meant to be read, I mean). The letter was produced in response to a request from a member of the public for public information. The letter is largely classified. After redaction, the only word made public is, "Thanks."

I recommend an article by Beverly Gage, "The Strange Politics of 'Classified' Information," which was published by The New York Times Magazine on August 27, 2017. Click the link to read it. It's only three pages long.

How much government "secrecy" should we allow? For me, the bottom line is pretty clear. If we believe in self-government, and in a government of, by, and for "the people," then the people have to know what's going on with the government. Secrecy just doesn't work.

What? We should let spies and enemies know what our government is doing? That is, after all, the inevitable result of letting the public know. Well, it's unfortunate if someone hostile to the nation learns something from reading government documents, but it's a lot worse if the citizens, supposedly in ultimate charge of the government, don't have the foggiest notion of what's going on.

Just about as radical as the idea of democratic self-government.