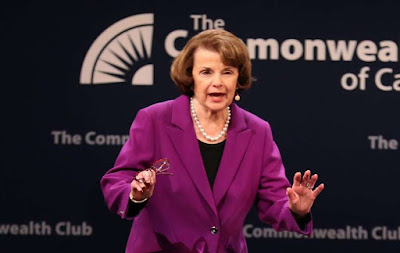 I am not a big fan of California Senator Dianne Feinstein, the former Mayor of San Francisco. I am not a big fan of former San Francisco Mayor Willie Brown, either. I do think, however, that Brown made a good point in the latest edition of his "Willie's World" column in the San Francisco Chronicle. The headline for the column that appeared yesterday, Sunday, was "Feinstein faces criticism for daring to be honest." That was the title of Brown's column as it appeared in the hard copy version of the paper. When you click the link, you'll get the online version, which comes with this title: "Feinstein’s lesson in political correctness: Root for disaster from Trump."

The point Brown made in his column is not unlike the point I was attempting to make yesterday, in my blog posting about Phyllis Schlafly. How we react to statements with which we disagree is important. How we conduct our debates about what we ought to think, and what we ought to do, makes a difference in what kind of democracy we achieve.


Sen. Dianne Feinstein has become the latest victim in our new world of politics — one where instant emotional gratification and ideological reinforcement crowd out intelligent discourse.

Feinstein jammed a stick into a snake pit when she said in a Commonwealth Club appearance that there was little chance of President Trump being impeached, and that she hoped “he has the ability to learn and to change, and if he does he can be a good president.”

Never mind that she also listed all her objections to both the president and his policies. Never mind that she’s certainly right about Trump’s impeachment chances, at least barring a Democratic landslide in 2018.

She did not feed the emotional needs of the audience. When some in attendance hissed at her candor, the story went viral, with Berniecrats quick to point to her remarks as proof California needs a new, progressive voice in the Senate.

Welcome to the circular firing squad. Bring on the purge of anyone who is not 100 percent into “resistance.”

Look, folks. There’s no reason to root against Trump learning and changing and being a “good president.” That would mean he wouldn’t blunder us into a nuclear war with North Korea, and would get religion on immigration, and wouldn’t let corporations do whatever they want to the environment. If he became a good president, that would mean he wasn’t using the office to enrich himself and his family and that he was respecting the rule of law.

But if all you want to do is to shout down any peep of dissent from the party line, there’s no room for that kind of reasoning. Feinstein found that out the hard way and, in less than 24 hours, had to issue a clarification defending herself.

“I’ve been strongly critical of President Trump when I disagree on policy and with his behavior,” she said. “Most recently, I was appalled by his comments in response to Charlottesville and the pardon of Sheriff Joe Arpaio. President Trump said that there were ‘very fine people’ in a crowd chanting, ‘Jews will not replace us.’ There’s nothing ‘fine’ about white supremacists, Nazis or the KKK.”

That is the way it is in today’s politics, where the key to success is to pander to people’s emotions rather than getting them to think or face reality.