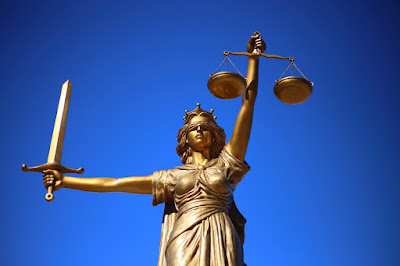 I have just finished teaching a summer school class at UCSC, "Introduction To Legal Process."

The textbook used in the class was titled, "Law, Justice And Society: A Sociolegal Introduction." The authors claim that it is only when society is governed by a "rule of law" that justice can be achieved. This is not, or shouldn't be, a controversial statement.

According to the textbook, the essence of the "rule of law," is that:
Sally Q. Yates, formerly a Deputy Attorney General during the Obama Administration, has written an Opinion Editorial that appeared in the July 29, 2017, edition of The New York Times. Yates' comments were titled, "Protect the Justice Department From Trump," and were focused on an apparent effort by President Trump to drive the current Attorney General from office. Yates' belief is:

The president is attempting to dismantle the rule of law, destroy the time-honored independence of the Justice Department, and undermine the career men and women who are devoted to seeking justice day in and day out, regardless of which political party is in power.

The United States Constitution is the written-down statement of the fundamental values and principles which the American people rely upon to constrain the actions of government, and to limit the actions of those persons who have been elected or appointed to wield governmental powers. The Constitution is, above all, intended to operate as a check upon our democratically-elected leaders, and the system that holds accountable both the government, and governmental officials, must be defended at all costs.

Without an "effective system" to enforce the fundamental values and principles that our Constitution proclaims, the Constitution is only a string of words. Yates is right, thus, that we must protect the independence and integrity of the institutions that are supposed to make sure that the "rule of law" is actually and effectively protected. Our elected President is not "above" the law, and neither is Congress. Justice, so often pictured as the blindfolded woman with the scales and the sword, is always placed above the buildings in which the government's work is being carried out.

Yates puts it this way, as she concludes her appeal:

We must do more than rubberneck as we drive past this car crash. We all have a responsibility to protect our Justice Department’s ability to do its job free from interference. The very foundation of our justice system — the rule of law — depends on it.