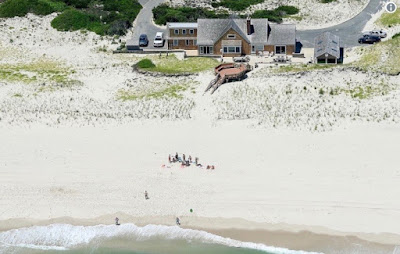 The picture above shows New Jersey Governor Chris Christie and his family enjoying life, last weekend, on a New Jersey public beach. Where, might you ask, was the public? Well, as it happens, Aaron Blake, a columnist for The Washington Post, has the answer:

The state government has shut down amid a budget dispute in New Jersey, which as we head into the Fourth of July means things like state beaches are regrettably off-limits. Off-limits, it seems, to everyone but the Christie family, which was spotted via aerial photos lounging on an otherwise-empty Island Beach State Park on Sunday.

Not only did Christie choose to head to a beach that other families won't be able to enjoy while the government is shut down, but he also seemed to try to hide this fact from the public Sunday during a news conference.

Somehow, when I saw the picture of the Christie family, lounging on a beach that had been cleared of the public by the Governor's own action, Winston Churchill's line about "fighting on the beaches" came to mind.

Click this link for some historical background on Churchill's wartime speeches to rally Britain, during the darkest hours of World War II. Here is an excerpt from his famous "we will fight them on the beaches" speech:

As Blake said in his column, "Chris Christie is probably the most unpopular governor in the country, and he seems bent on making sure of it."

It was Christie himself, apparently, who closed the beaches on the weekend before the Fourth of July holiday, presumably to get leverage in a budget battle in the Legislature. Having done so, it was an outrageous usurpation by Christie then to take possession of these beaches for his private use. Christie, it is clear, is not exactly a statesman on the order of Winston Churchill. There aren't any others out there like Winston Churchill, either, and that specifically includes the current occupant of The White House.

When "our" government is taken over by and operated for the benefit of those who are supposed to represent us (and for their wealthy friends), it is inevitable that disrespect and disdain for politics and government will grow. And so it has, and so our disdain and disgust for government continues to grow, fueled by the actions of those like Chris Christie, who have stolen away government, to use it for themselves and for their private gain.

We say that our government is to exist only "of, by, and for the people," but those who have stolen our government from us have turned it into a place of personal gain, a sometimes lifetime job, at high pay, and with special privileges for themselves and their friends.

I guess.... We are going to have to fight them in the streets, and at the polls, and on the beaches, too!